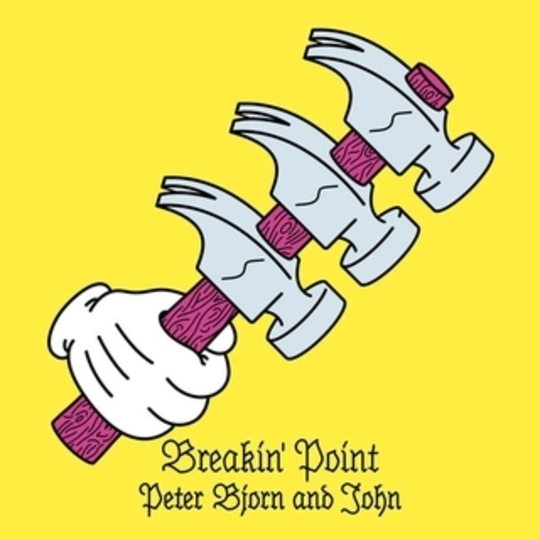 A decade on, Peter Bjorn and John remain entirely synonymous with 'Young Folks', the 2006 single that was almost immediately awarded 'millennial anthem' status upon its inauguration on college radios worldwide. No honest discussion of the band can commence without first calling attention to that almost disgustingly catchy single. Although the invective is commonly tossed about, there aren't a lot of true 'one hit wonder' bands infiltrating record stores, and Peter Bjorn and John certainly don’t deserve such a label.

But to act like 'Young Folks' isn’t in the catalyst to 95 percent of most conversations about the band is fantasy - as the trio themselves would most likely be free to admit. Even though Breakin’ Point quite literally is an album about breakups, the three musicians desperately attempting to rid themselves of the dwarfing essence of 'Young Folks', and arguably, use the cartoon hammer on the album cover to bang this sentiment into our consciousness. In this instance, desperation breeds 12 songs (well, almost) of infectious gold.

Certainly the band’s admission that they wrote each song with the intention of creating 'singles' instead of 'tracks' holds up under closer scrutiny. Even though 2011’s Gimme Some was an unmasked attempt to recapture the attention of an audience still happily whistling to 'Young Folks', Breakin’ Point is a much more meticulous effort through and through, as if each track was laboured and toiled over in microscopic detail. What’s even more impressive is how the trio spin such sonic merriment while spoonfeeding the swirl of emotions following the deterioration of a relationship. The rush of dance-happy synths on 'Dominoes' almost completely blunts the shards of inevitable hopelessness found in the lyrics. On the other hand, the dreamlike, tranquil essence of 'Love Is What You Want' is less of a romp, but still manages to achieve a penetrating aura of catchiness despite the overall melancholy.

But while breakup-induced consequential thoughts and feelings are the common theme throughout Breakin’ Point, not all of the lyrics are focused on unpleasant thoughts. Nostalgic memories of happier times pervade songs like 'Do Si Do', where a combination of acoustic guitars, synths, and energetic basslines account for one of the album’s signature moments of replayable bliss. Even the title track is marked by the same sort of contagious whistling that marks 'Young Folk', but manages to distinguish itself as its own unique, borderline magnetic offspring. But the truly magnetic moments, like 'Love Is What You Want', strike a harmonic degree of juxtaposition. When the content sails over pleasant memories and dips into more troubled waters, an inoculating melodies aid the various travails, like the trials and tribulations symptomatic of post-relationship regrets explored on 'Hard Sleep'.

The concluding track, 'Pretty Dumb Pretty Lame', while catchy, is a rare instance of mediocrity. An overt criticism of both the music industry, their 'relationship' with it, and an overall demand for another 'Young Folks' - the song does nothing more than blur the themes of the preceding tracks by personifying a sentiment they have long ago expressed. Viewed in a holistic lens, Breakin’ Point is the most simplistic, stripped-down album of the trio’s catalogue. But in the case of a band like Peter Bjorn and John, simplicity is ultimately what works-- as showcased repeatedly throughout the album. Not since 2004’s Writer’s Block have they released a project quite as cohesive and sonically thrilling throughout. Bands normally falter in their attempts to create an album full of 'hits' instead of remaining true to whatever their mission statement is or artistic roots are, but this is clearly the field where PB&J excel - creating bittersweet musical moments that we will be compelled to revisit again and again.