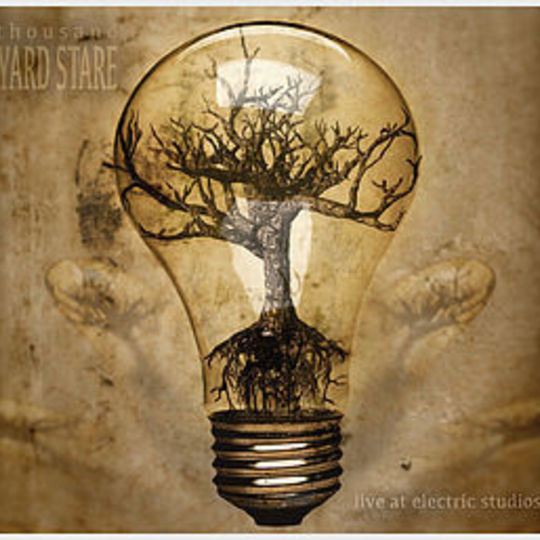 It will be 25 years next February since Thousand Yard Stare released Hands On, their debut LP. Although critically acclaimed at the time, it found itself quickly jettisoned against a quagmire of Britpop and grunge acts infiltrating the market, and by the time follow-up Mappamundi was issued the following year, they'd become pretty much forgotten about. Particularly by the music press thathad celebrated them just 18 months earlier.

Nevertheless, quality will always outweigh fickle scenes and Hands On has gone on to be recognised as one of the great lost (and finest) debuts of that era. A record brimming with diverse song structures, pop hooks and lyrical witticisms about middle England that would predate a lot of the oncoming Britpop bands by several years.

And the Thousand Yard Stare stretches back three years before the release of Hands On. Based in the unholy Berkshire suburb of Slough, their subsequent rise can be attested to two things. Tireless hard work culminating in over a hundred gigs up and down the land in a very short space of time and a DIY approach that saw them set up their own label and fanzine. And a string of EP releases many bands of the day would have swapped their right arms for. Never content with issuing filler or holding songs back for later, every song received equal billing. The b-sides were as strong as the lead tracks and each formed a pivotal part of the band's live show, which undoubtedly alerted Polydor to their potential.

So last year's reunion and sold out show at London's Borderline venue sparked a renewed wave of interest in a band many had deemed to be long forgotten in the annals of time. Although located in various parts of the British Isles these days – rhythm guitarist Kevin Moxon resides in Scotland while the other four members are located in various corners of the south east and south west of England – singer Stephen Barnes and lead guitarist Giles Duffy started writing again at the start of this year and three of those new compositions appear alongside ten reworked versions of past favourites on Live At Electric Studios, their first release since 1993.

Recorded in just two days at Brighton's Electric Studios, mainly to capture the essence of the band's live shows. What's most telling about the three new songs is how they complement the older, more familiar material placed alongside them on the record. 'Heimlich Maneuver' is perhaps the most immediate of the three, its insistent riff harking back to the Thousand Yard Stare's halcyon days while also being fairly reminiscent of The Wonder Stuff in their punkier Eight Legged Groove Machine prime. Of the other two, 'Dystopia' is perhaps more angular than most of the band's output. Dissonant in structure without being overly complicated, it would probably have sat well with some of the more diverse numbers such as 'Sooner' or 'Half Size' on 1993's Mappamundi rather than their earlier material. Meanwhile, 'Petrichor' serves its purpose as an introductory instrumental to 'Comeuppance', perhaps their best known song. Its slow build up sets the tone for Dominic Bostock's drum crescendo - the most distinctive change from the original recording of 'Comeuppance' which previously featured a pre-programmed drum machine - and only adding to the live feel in the process.

Of the other ten songs that make up Live At Electric Studios, Thousand Yard Stare have selected what is essentially their live set. Opener 'Version Of Me' - one of only two songs here from their second album - takes on a vibrant, rawer edge to its original counterpart. Initially released as the lead single off Mappamundi back in 1993, it should have been the song that catapulted them into arena sized venues but ended up as their final parting shot instead. Sounding revitalised and brimming with energy, it's one of this record's standout moments even when placed with such hallowed company from the band's back catalogue. It's also worth mentioning the inclusion of 'Keepsake' and 'Three Doors Down', both of which were originally released on 1991's Seasonstream and 1990's Weatherwatching EPs respectively. Having been staples of Thousand Yard Stare's live set from day one, these recordings usurp the originals if only due to both budgetary constraints being limited back then and technology having advanced a great deal since.

The aforementioned Weatherwatching's lead track 'Wonderment' also gets a reworking here that ends up befitting of its celebratory presence in their live set. Of the rest, it's pretty much a case of as you were, especially with the Hands On material which was pretty much near perfect from the outset. Nevertheless, it's still a pleasure to hear the likes of 'Buttermouth', 'Cottager' and '0-0 a.e.t.' in a live context which is where most of Thousand Yard Stare's audience will have discovered them.

Overall, as live albums go - even though Live At Electric Studios isn't technically a live record in the most pedantic sense of the word - it serves as both a fitting epitaph and sophisticated gateway for fans old and new whilst whetting the appetite for more new material in the process. Long may their revival continue!