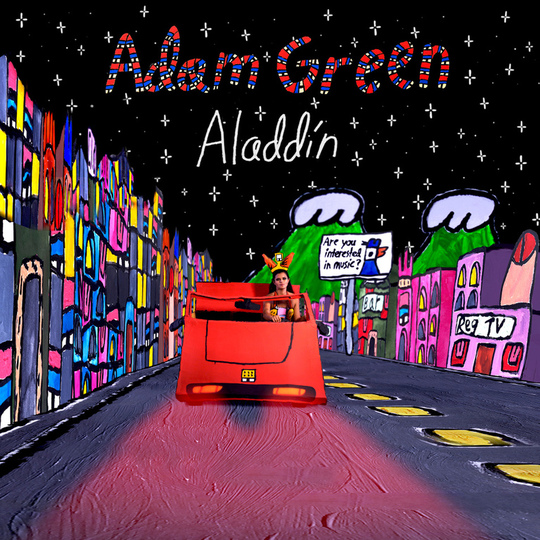 Right this very moment, somewhere in the world, an instant classic is being beamed into someone’s eyeholes. A huge, larger-than-life adaptation of an old tale, one that features madcap magic, dark souls and rather camp costumes. No, I’m not talking about that silly old captain comic thing Disney have plopped out this month. I’m talking about Adam Green’s twisted Aladdin.

Mr Green has been working on this project for a number of years. Three to be exact. While most focus in the press leading up to the film's release has, quite rightly, been on the rather bizarre narrative and cast (Macaulay Culkin, Devendra Banhart, Har Mar Superstar) little has been discussed about the film’s playfully quirky soundtrack.

This soundtrack, Adam Green’s ninth solo effort, works as a companion piece to the feature film. Musically it’s pretty much everything we have come to expect from the former Moldy Peach. A string section here, a lovelorn ballad there. Lyrically however, there is a playfulness that has been lost since the days of his rather brilliant, and overlooked 2005 album Gemstones. ‘Time Chair’ rollicks around like a giddy kid on MDMA, joking about flying off the edge of the map and other suitably wacky topics.

It’s with these pop songs that Green shines brightest. He is an underappreciated genius when it comes to melancholic dread. This shows on the superb ‘Never Lift A Finger’. In its short two minutes 28 second lifespan it manages to make your little heart and soul smile and cry at the same time. I’m not entirely sure how he manages it, but he does. Maybe he’s some sort of wizard? It’s the only viable explanation.

Despite all of the strangeness contained within the songs, the weirdest thing about the album has nothing to do with the music. The whole 'soundtrack' concept becomes quite a hindrance to the magic of the album. It takes away the wonderful guessing game that comes with listening to music. If we didn’t know the record was a soundtrack we would be sat wondering what the hell the obtuse Spanish swagger of ‘Birthday Mambo’ was all about, and instead of just banging on about how good Adam Green is at the whole music thing we would be sitting down trying to decipher the oddity that is ‘Do Some Blow’, trawling through the deep and twisted lyrics, trying to find some answers. If we were to do this I’m fairly sure we would come to the conclusion that the whole darn album is actually a twisted metaphor for finding love in a retro-obsessed future, a future that seems almost too familiar…

Instead, what we have to deal with is a record we already fully understand, a record that we can’t project our own ideas on to, and that’s a shame. It’s nice to dream every now and then, Adam. Let us dream.

The Heart Speaks in Whispers