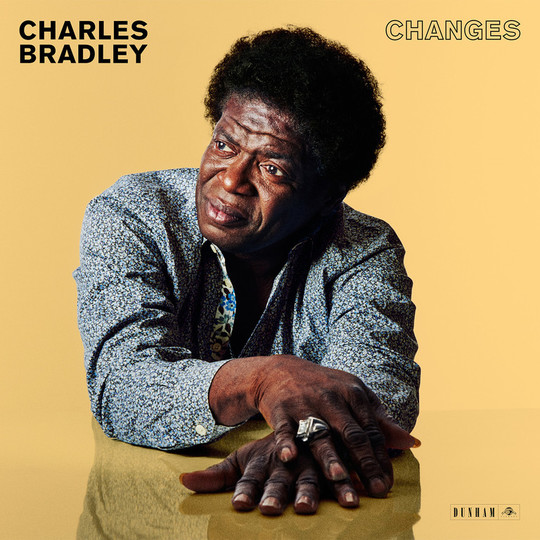 In the first few seconds of this, his third album, Charles Bradley describes himself as “a brother who came from the hard licks of life, who knows that America is my home”. Later, he says “America represents love for humanity, for all the world” before asking to God to “bless America, my home, sweet home”. Fortunately, what follows on the rest of Changes is a challenge to Bradley's beloved nation, rather than a mere paean to its greatness.

Witness, for instance, 'Ain't It A Sin'. “It's my turn to love and be loved”, the song begins, over a furiously funky backdrop, the kind for which Bradley has become rightly recognised over his two previous releases for Daptone. The chorus hook is a killer: “if you ain't gonna do me right, I might just do you in. Ain't it a sin?”, he imparts, with a dose of malevolence. Bradley means business, and he wants America and the world to know. It would be easy for this sense of purpose, this quest for justice, to be lost amidst what is, essentially, a plainly brilliant song sure to get dancefloors and festival fields moving this summer, but it seems that, as well as wanting to make people dance, Bradley wants to make them think. In these days of heightened racial tensions, his message seems timely.

The title track is a cover of the Black Sabbath original. A seemingly unlikely choice on paper, the treatment given to it by Bradley and his Menahan Street Band colleagues renders it entirely his. It is a triumph, as the languid 6/8 gives him ample opportunity to extract every possible ounce of emotion from the song's simple chorus line “I'm going through changes....in my life”. A track earlier, 'Ain't Gonna Give It Up' has shown an entirely different side to things, as a lighter groove, some wonderful pizzicato brass and a gloriously spacious sonic palette leave plenty of room for the full extent of his incredible vocal prowess to be exhibited. Not merely for effect is it shown off however. Since his 2011 debut, the scope of Bradley's songwriting and execution has expanded beyond all recognition. No more is he just the owner of a brilliant rags to riches story, having lived a life in dead end jobs and on the streets before being discovered by the Daptone's Gabriel Roth impersonating James Brown. Now, despite his vocal inflexions bearing more than a passing resemblance to those of the great man, he is a formidable artist in his own right with an ever-expanding canon of powerful and affecting songs.

Not everything works quite as well. 'You Think I Don't Know (But I Know)', by comparison to what goes before, feels lightweight and inconsequential. On other albums this could be a key song, but here it simply doesn't seem to fit. Thankfully, 'Change for the World' immediately sets thanks aright with a powerful and plangent horn hook setting the scene for Bradley to angrily intone "if we're not careful, we'll be back segregated. Change for the better of your soul...I've gotta give you my love. If you don't know by now, just check yourself”. His message of changing the world through love has been delivered many times, but not like this. “Stop hiding behind religion....heaven is crying...God is unhappy....Put away the guns and take this love”. It might well sound like a sermon, but fortunately, as well as being a sentiment we all need to hear, it is, like 'Ain't It a Sin' earlier, a song that it is impossible not to dance to. Charles Bradley is trying to change the world. Let's see if we can't help him succeed.