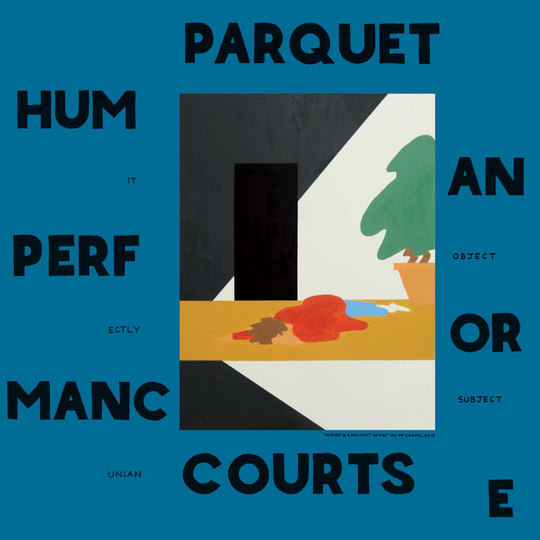 Six years into a career which has included arguably two of the decade's finest albums, there’s still a lot of talk about ‘who’ rather than ‘what’ Parquet Courts sound like. And while flattering comparisons to Wire, The Velvet Underground and Pavement hold water, it’s a critique which ignores the Brooklyn quartet’s most notable quality: unwavering progression. It’s a trait, which has seen them rarely recycle for the sake of convenience, or pander to the expectations of fans and critics. It’s the reason why an EP like last year’s Monastic Living can feel like they give zero fucks what we think about them: because torturous experimental meanderings are sometimes the price you pay for evolution.

When we last saw Parquet Courts (or rather Parkay Quarts, which is how they briefly identified back in late-2014) they’d just released their fourth LP Content Nausea. At the time its melodic safety, subdued arrangements (and a memorable Eartha Kitt cover) left it feeling like a lesser work. A side-step from their-until then- soaring trajectory. It didn’t help that it followed in the wake of Sunbathing Animal, which was the first time they’d blurred the lines between our presumption of what they sounded like and what they actually sounded like. It was a magnificent record, which gave us a taste of just how bold and intelligent they had become in the years since their breakout [Light Up Gold}(http://drownedinsound.com/releases/18016/reviews/4147811).

But looking back, while not as immediately engaging as it’s predecessor, Content Nausea has shaped the wider arc of their sound, bringing melody and structure where once there was only languorous, chaotic fury. Its influence is keenly felt on Human Performance, but so is the ambition of Sunbathing Animal, the result is a bridge between melody, intelligence and intent, which adds up to their most mature sounding work yet.

What’s immediately noticeable is a spring in the band’s step which sees them remain mellifluous, even when they’re mining the depths of the human condition, whether it’s the guitars which shimmer and jangle on 'Outside’, the nascent bongo line that threatens to breakout into a dance party on ‘One Man, No City’ or the pastoral keys that emerge halfway through the title track. Single ‘Berlin Got Blurry’ whittles this down to it’s essence, rolling along with bounce and swagger; Spaghetti Western licks and a reverberating organ as Savage sings “Cell-phone service is not that expensive/But that takes commitment and you just don’t have it” unifying the strange bedfellows of modern ennui and... errr... a hoedown.

Of course, lyrically the band are still concerned with isolation and anxiety: the disconnection between cities, and the people who inhabit them, a particular spectre haunting many of these songs. But while their intent has occasionally blurred in the past, Human Performance sees Parquet Courts deliver ideas with laser accuracy. ‘Captive of the Sun' 'is a curt ode to mental exhaustion in a city of endless possibility, the jolts and jammers of guitars swirl around Andrew Savage as he raps about the rhythmic clatter of trains “repeating like a pulse of defeat”, leaving him like “a past-time streamer hanging from the rafters”. It finds the band looking at life with a pathos and vulnerability not seen since tracks like 2014’s ‘Instant Disassembly’.

As on previous albums, these songs still kick and flail at the mundane existentialism of our world, but there seems to be a peace at the core of Human Performance; an acceptance echoed towards the end of the album, on desolate lullaby ‘It’s Gonna Happen’, as the phrase “It’s going to happen every time/So rehearse with me in mind” repeats like the coda of a dream. That's not to say they've gone soft, but as the band walk through the storm of life, it finally feels like they’ve accepted their place at the centre of the hurricane.