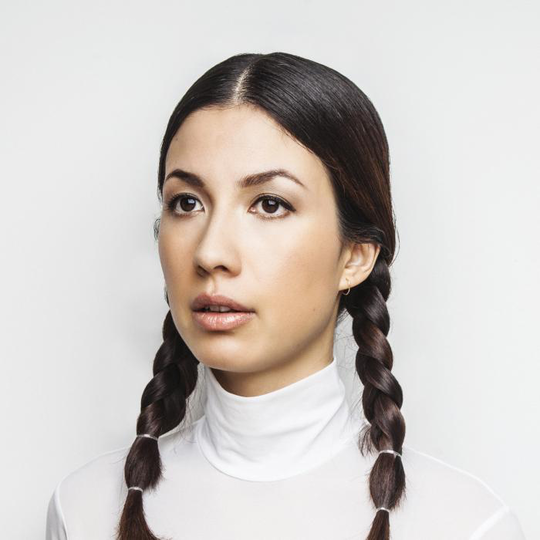 As well as being a record about new love and unfamiliar places, Emmy the Great's third album Second Love mixes electronica with a knack for cutting, heartbreaking lyrics and acoustic orchestration. I'd suspected there was a new producer on board when I first heard the undulating, billowing 'Swimming Pool'. But having listened to the record in full, it's clear that this comes down to a theme – love and life in the digital age and how confusing that can be.

In spite of the digital soundscape, the vocals and harmonies are as pure and crisp as ever – so instead of feeling like a totally new direction, it's more a natural progression in direct response to changing surroundings. And if the sounds are modern, the subject matter is old – it's about discovering love and the doubts that come with that. On 'Less Then Three', Emmy repeats the line, "Take it slow like a heartbeat" – an appeal to step away from the complexities and stress and focus on being human for a second. It's a relief.

Similarly, 'Algorithm' is a juxtaposition of two worlds colliding: "Showing me the way in this world we live in,/ Pumping through my heart – it's an algorithm". The song builds in layers, repeats and powers forward until the lines "the noise can only get louder" and "I hope it leads me to you". They underline the tension in the record between being overstimulated, constantly connected and absorbing information in our virtual world with finding something meaningful in reality.

The droll poetry of Emmy's lyrics are brilliantly showcased in 'Hyperlink'. The scene evoked could be any hipster freelancer-filled cafe in London, LA or New York: "All those people tapping keys/ Where once they would read magazines./ Take me walking through the screens./ Tell me all your broken dreams" At this point, connecting emotionally feels as much of a given as connecting to the WiFi. From layers of distraction and discarded sentences, the winning thought appears: "I know love is the answer in the end"

'Social Halo' is disarming in its vulnerability and honesty, describing the uncertainty and insecurity that comes with new love, while 'Dance With Me' is a steamy, mesmerising tale of seduction. 'Phoenixes' takes it back to a Nineties/Noughties youth full of Bliss magazine, heartthrob posters on the wall, dieting and learning about fashion: "We thought Vogue was French for Bible". It tells fondly of an era of innocent change and dreamy future plans; set against the firm knowledge of the reality of the rest of the album, this is particularly poignant.

'Part of Me' is a short, fast and lyrically self-assured track about reaching a point of belonging with another person, while closing track 'Lost In You' reintroduces the uncertainty that typifies the record. One of the album's most beautiful songs, the sparse, single-note piano beneath the reverb of the vocal is startling. It begins "Once I was a flight risk", which later becomes "I wish I was a flight risk", and turns to being held, never let go, getting "lost in you". It's as if fleeing the noise and distraction of everything else and being absorbed in someone is the only way it can work.