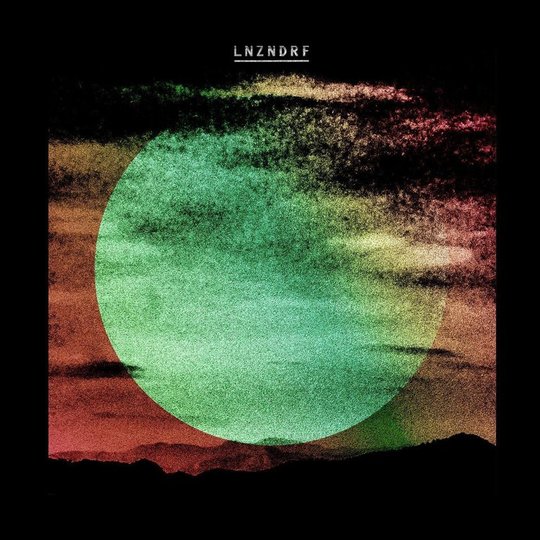 There’s a great deal of moonlighting going on these days - especially if you’re a member of The National. The Dessner twins have long dipped their toes in foreign waters; making forays into contemporary classical with the likes of the Kronos Quartet and taking on various production duties: Matt Berninger embraced his inner ‘fun guy’ on El Vy’s funky debut and its playful videos. But the Devendorf brothers – Scott and Bryan –have kept a lower profile - quietly plying their trade as the rhythmic engine room of The National. Until now.

The brothers hooked up with Ben Lanz, of Beirut, and recorded LNZNDRF in a church in Cincinnati over the course of two and half days. The resulting collection is edited versions of 30-plus minute jam sessions that the trio embarked on during that brief time. In many respects, it shows. Most of the tracks on this album latch on to an idea and just run with it. 'Hypo Skate', for example, picks up with a rolling drum line and chiming guitar riff, and despite the odd keyboard undulation that is precisely where it sticks for more than six minutes. Now that might sound like tedious post-rock of the highest order, but it's somehow quite enchanting and hypnotic. And yet 'Stars and Time' comes in at just under a minute and manages to be quite infuriating in its persistent crunch of distorted guitar. It's a mixed bag. <br.<br.

LNZNDRF is most certainly a record that tails off towards the end. The lack of variety and the instance on focusing solely on one idea at a time starts to grate. By the time we get to the closer, 'Summara', patience is tested. It’s a noisy tool of a jam that fails to master the repetitive Krautrock stylings that Neu! implemented so well on tracks like Hallogallo.

Focus is best directed towards the album's first half. This is, at its best, a record of landscapes: take the dustbowl grooves of 'Future You', or the icy vistas evoked by 'Mt Storm' - these are songs that successfully create immersive narratives and effective atmospherics.

'Kind Things' also has a lot to recommend it. It's a loose jam of a song that most likely reflects the fact that this is music made free of the constrictions and pressures of their respective bands higher profiles. Its leading bass and wah-wah guitar frames the whimsical chorus that could double as a slogan for the band: “I’m working on nice things, kind things.”

Nice, kind things aside, LNZNDRF wisely chose 'Beneath the Black Sea' as the lead single from the album. It’s unquestionably the strongest track on the record: a subtle but compulsive piece that all at once references Joy Divisions’s 'Atmosphere', The War On Drugs 'Red Eyes', and not least, The National in a more general sense. There’s very little obvious Beirut influence here, but the Devendorf brother's band looms large.

Despite not being an entirely successful aside there’s an argument that a temporary detour was a necessary for members of The National and Beirut. Beirut’s last record suffered from an extended absence both in its application and response. And the National’s Trouble Will Find Me, despite highs like the devastating 'Pink Rabbits', didn’t satisfy like previous works. It felt like a band reaching for stadium glory but foregoing much of the interesting musicality they formally applied in the process.

Some of what made the National unique was the interesting rhythms and drum lines found on the likes of 'Friend of Mine' and 'Terrible Love'. Instead, they headed towards a more straightforward rock sound. This project may have been an opportunity for the brothers to rekindle and refresh their more adventurous beginnings.

As much as this collective group of people's moonlighting has been a pleasant distraction the overall outcome just makes you long for the best moments of their respective bands. What we’re all really waiting for is another 'Slow Show' or 'Santa Fe'. You can only hope they all return revived and inspired and hit us up with their best yet. LNZNDRF lacks the deft, enchanting musical nuance of The National or Beirut but it does make for enjoyable, if not startling, interim listening.