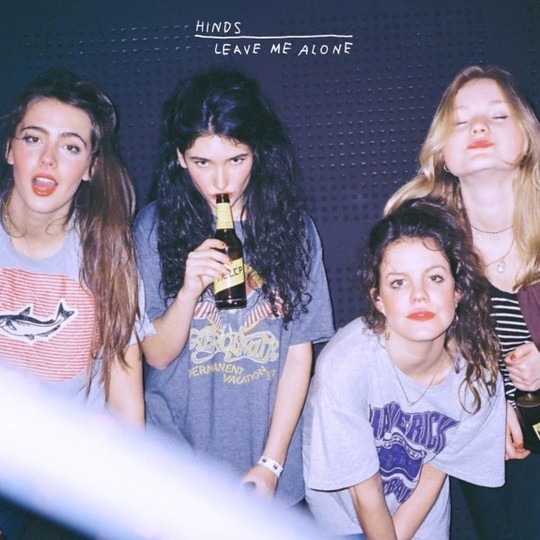 Since they burst onto the scene a few years ago, Madrid’s Hinds have picked up ample praise, been forced to change their name (a development the band took with commendable grace) and toured a lot, both in Europe and overseas, all on the basis of just a few (pretty raw) singles. Inspired equal parts by the likes of Ty Segall, the Strokes and antecedents like the Velvet Underground, the group originated as a covers act comprising best friends Carlotta Cosials and Ana García Perrote before adding Ade Martín and Amber Grimbergen on bass and drums, respectively. It isn’t hard to understand why certain quarters of the music press have taken them to heart: the attitude stamped all over their releases to date is rough yet joyful, defiant and infectious. The quartet are out to have fun, as anyone who’s attended any of their gloriously ramshackle live shows would no doubt agree.

And yet. Here is an excerpt from a message from the band on Leave Me Alone’s press release: ‘it’s funny ‘cause we thought this album would be all party and cheerfulness but . SURPRISE. it’s not!!!!! haha.’ They talk about how they only wrote the album while at home - something that didn’t occur a great deal given their hectic schedule - on and off over a period of 12 months, and, as life isn’t always a celebration, it was only natural that the music they came up with reflected that. The result is a more sober work than the group anticipated - sad, even (their words) - but an unexpectedly lovely one for being just so.

Not to say that Leave Me Alone is no fun; in songs like ‘San Diego’ or ‘Castigadas en el Granero’ (‘Grounded in the Barn’) the quartet make a convincing racket, all jangly, propulsive guitars and twin vocals courtesy of Cosials and Perrote. Their voices clamber atop and over each other, Cosials’ sharp, sticky and sensual, Perrote’s softer and deeper. Sometimes, like on single ‘Bamboo’, they accentuate, echo and bleed into each other: “I need you to be around my legs and stop complaining about the rain,” sings Cosials. Before she’s finished the line, Perrote has already started on the next segment of the song: “And how could I tell you without looking freaking mad / That I’m not always gonna be around”, she wonders.

Taken in isolation (or as a recycled-from-the-set, stage invasion-provoking festival encore, ‘Bamboo’ is irresistible: a loose, hooky admonishment of a lover; one of the reasons so many got excited about the band in the first place. Here, though, nestled among the other songs that make up Leave Me Alone, the melancholy that informs it is all the more apparent. Indeed, the sadness that the group sensed while making the album can be felt throughout, most obviously on mid-album breather ‘Solar Gap’, but also on seemingly exuberant cuts like ‘Chili Town’, in which Cosials notes: “I am flirting with this guy / Just to pretend I’m fine.”

The opening ‘Garden’ is a fine statement of intent, an indie-rock stomper detailing a relationship in which “something failed”; an outcome which you get the impression was inevitable, but an experience worth celebrating nonetheless. On the other end of the album ‘Walking Home’ closes proceedings in giddy, optimistic fashion, pledging devotion via an increasingly sweet, silly set of metaphors (“Darling, you’re the rice of my bowl … Honey, you’re the lime of my Coke”).

That Leave Me Alone is playful while boasting unexpected depths, then, is not entirely surprising. NME put Jimmy Iovine of Apple Music’s imbecilic comments to Cosials and Perrote recently, and the pair’s response is both illuminating and kind of heartbreaking. Hinds, as that video and this interview with Loud and Quiet make clear, are very much aware of the sexism that permeates the music industry, and though they state that it wasn’t really a concern previously, it’s something that nevertheless shades the album, adding an empowering edge to a song entitled ‘I’ll Be Your Man’, for example.

“It was dirty, I don't say it to be rude / I say it ‘cause it was pure,” holler Cosials and Perrote on ‘Walking Home’. Dirty and pure, Leave Me Alone is a remarkable debut: one for nights of excess and the hangovers that follow, made bearable by the friends they’re shared with. Scrappy and unvarnished, spiked by melancholy and buoyed by simple, twinkling lead guitar, songs like the standout ‘Easy’ and ‘Fat Calmed Kiddos’ (and ‘Bamboo’, and ‘Chili Town’, and all the others) bid you enter a world of drunken text messages, of sweat and saliva and longing, and make it both affecting and appealing: an elegy for youth that’s still being lived, mistakes, triumphs and all.