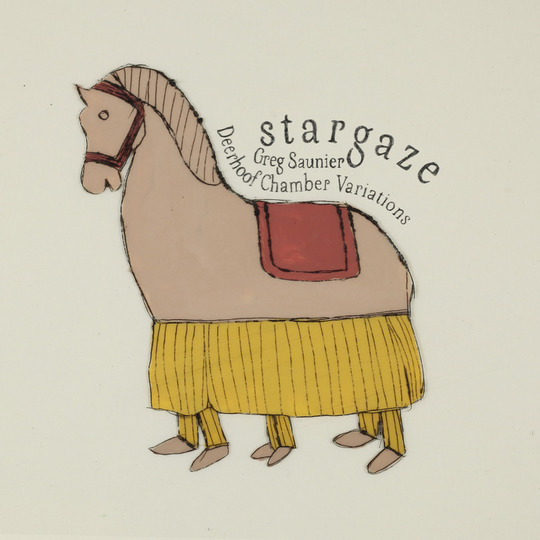 The opening notes of Stargaze’s Deerhoof Chamber Variations EP seem to be a homage to Brian Eno’s 'St. Elmo’s Fire'. Which, intentional or not, is misleading. This songs on Deerhoof Chamber Variations are not pop songs, and the EP is barely categorisable as a pop record. 'Pop music', as such, shows evidence of itself primarily in the EP’s presentation: a ten-song collection, running just under 20 minutes, with funky sleeve art. When you explore the music itself, it’s clear that Stargaze have interest in pop conventions only insofar as they might attract (and, hopefully, maintain) the attention of listeners otherwise inclined to wax obligatorily over Deerhunter’s latest.

In college, I minored in music, so I have some of the analytic tools necessary to access and (very rudimentarily) deconstruct this music. Now, if you didn’t study Music at an Institution of Higher Learning, but merely prefer to explore the spheres of the avant-garde, you’ll probably have just as good a time listening to this as I did. This is classical contemporary music: classical music made by and for indie/pop millennials, whose attention spans alight at only being asked to focus for 19 minutes.

Deerhoof Chamber Variations is a mini-odyssey with minimal narrative information. It’s a single piece of music that flits between moods without warning, and without adherence to any recognisable song structures. One does, however, recognise the instrumentation as conventionally classical; the jarring electric guitar on 'Jagged Fruit' excepted, these are the strings, horns, pianos, and voices that you’ve sat through—and perhaps even enjoyed—a number of times.

No melodic motifs recur, which makes it difficult to confidently say that there are direct relationships between the tracks. The main consistency is a highly impressionistic, whimsical insecurity. Two pure, indistinguishable female voices recur on each track, one panned far east and the other panned far west in the mix. Its most effectual moments come on 'Data', where the voices deliver the only fully-formed words on the EP: “Nothing you can do can stop me falling” and later, “Careful with your dreams; don’t scream!” Every second syllable comes through the opposite headphone, which evokes a duality of self. The opposing, identical voices makes for the EP’s most clearly defined thematic device.

Between 'Data' and 'Jagged Fruit' — the only two tracks to exceed two minutes, and therefore introduction and climax, respectively — five brief songs aim to hold a mirror up to highly abstract moods. The ascending piano melody in 'The Perfect Me' alternates unpredictably between staccato and legato, before giving way to a drunken-seeming clarinet heading a gone-before-you-know-it 6/4 progression. 'My Purple Past' is all gravitas, from the earnest and melodramatic to the ephemeral and revelatory. Without clearer context, one must assume that the richly textured cello on 'O’Malley, Former Underdog' represents O’Malley him/herself, and that the surrounding ornamentation represents his ascent from underdog to frontrunner—or whatever supersedes “underdog.”

If your game is analysis, the deduction could go on ad infinitum. Which comes with its share of pros and cons. I think the EP would have benefitted from a greater lyrical presence, as a way to illuminate the listener’s path to Deeper Meaning. As is, Deerhoof Chamber Variations never tips its hand, and barely lets on that it has a hand to tip. However, my lyrical obsessions bow down to the lucid arrangements, masterful engineering, and clear, confident poetic sensibility, all of which make for a highly rewarding listening/analytic experience. Those looking for riotous fun—whom I doubt have read this far anyway—won’t likely find it here. But those looking for something fresh and exciting most certainly will.

Science & Magic: A Soundtrack to the Universe