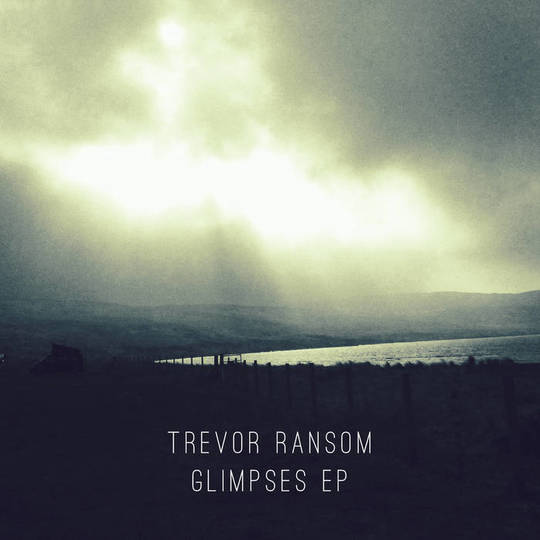 Trevor Ransom’s Glimpses EP is, in the grand tradition of classical and modern ambient music, concerned with approximating emotional states without getting bogged down in language. Song titles are used to ground you in a location, or to focus you on an image, or to conjure a specific mood: somehow, to nudge you in the direction of a particular feeling. 'If You Had Wanted To', for example, suggests disconnect between two people, wherein the narrator was the more desirous party. What appear to be kitchen conversations introduce the song, and they are soon overwhelmed a crescendo of synths, at which point the only human voice is a solitary wavering moan. The moan wades through metallic percussion, melancholic piano, and wind-gust synths before hurtling to a climactic conclusion that ultimately leaves the voice alone with the sound of heavy rain.

If the sleeve art is any indication (and it definitely is), the entire EP is best served by such a rainstorm. While each track has its glimmer of hope, the prevailing mood is mournful: that humbling, honest-with-myself mentality that a rainy day is known to carry. The cover image depicts the intrusion of sunlight through rainclouds, a well-worn image of recurrent hope, and an image that well befits the tone and narrative of the collection.

Perhaps strongest about Glimpses is its ability to narrate without words. It begins with several songs concerned with disconnect and loss. 'Out of Focus in the Forest' could well be interpreted to refer to just about anything—concrete forests, the vine-like overgrowth of negative thought, or perhaps just the forest itself. Whichever way you cut it, it is designed to approximate insecurity. The next two songs follow suit: 'If You Had Wanted To' (detailed above) is proceeded by 'Rags', which is not as down-trodden as the title might suggest. It is both uptempo and more dynamically consistent than its two predecessors. While the title 'Rags' doesn’t bring to mind a precisely confident individual, the music suggests someone who is appreciative of their rags, the same way one would gaze nostalgically at a childhood scar.

'Rags' is where the narrative takes a turn for the hopeful. The title track puts forth the densest and most complex mood, and is the EP’s strongest offering. A melodic piano runs riverlike beneath suddenly confident percussion and ecstatic strings. The title 'Glimpses' refers to the type of glimpse recorded on the front cover: an inexplicable burst of sunlight over an otherwise brooding, contemplative mood. 'Cathedral' serves as a sonic sanctuary, and then the collection ends with 'Incandescent', a bulwark confusion of sounds and melodic ideas. It also features the EP’s only spoken words, which don’t clarify so much as reinforce what the music had already been getting at for a half hour.

The narrative is smooth, and, with a little bit of attention, easy to follow. The overriding mood is clear, which is as much a credit to the non-music content as to the songs themselves. The only true disappointment is that there ins’t anything especially innovative going on. I’ve heard these sounds before; I’m familiar with the person-pitch of ambient music. I first listened to this EP in the middle of a rainstorm, and it was a good companion. It spoke the language of the moment. But ultimately, Glimpses reads more like an audition tape than a true artistic statement. In my evaluation, it navigates competently through pre-existing territory, but doesn’t expand the scope. Trevor Ransom’s next task is to venture into some truly unexplored section of the forest.