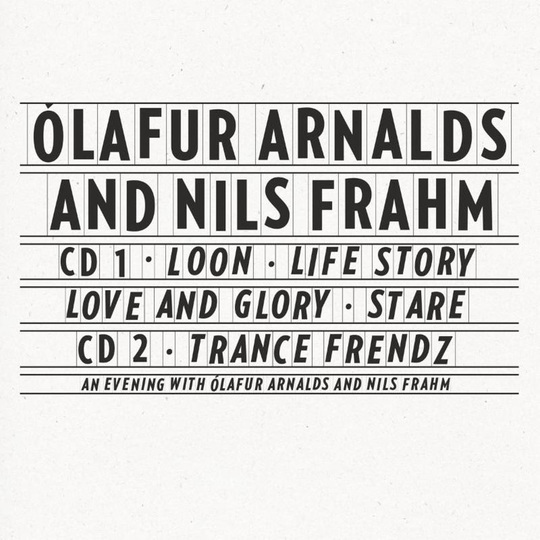 It’s Friday. It’s 5pm - Lads’ Night has officially begun. Bang some beers in the fridge, dig out the Domino’s menu, and fire up FIFA – the next few hours are yours to stew in your own juice.

It’s a safe bet that if you've experienced one of these nights over the past three years – that as you were hurling a Playstation controller pad wallwards, or dribbling lukewarm lager onto your mate’s sofa - composers Nils Frahm and Ólafur Arnalds were having one of their own nights in, holed up in either one of their respective Berlin or Reykjavik studios, substituting console gaming with musical experiments. It’s this three years' worth of prodigious nights in which now see the light of day, as Collaborative Works.

Both Frahm and Arnalds’ careers have exploded in the past few years – the former firmly establishing himself as a critically-acclaimed darling of the international live music scene with a swathe of stunning performances; the latter scoring films and TV programmes with his immediately recognisable electro-classical skin-crawlers. A project such as this would usually be filed away alongside the usual fodder of B-sides and reissues, but one listen makes it clear that this is a far heftier more ambitious and - ultimately - attention-worthy beast.

The set (the term ‘album’ is firmly rejected by Frahm and Arnalds) is divided into four parts, each of which blends organic and electronic elements to varying degrees. Created mostly in the wee hours, each set reveals and revels in a different nighttime atmosphere, from serene sleepiness to toss-and-turning unease. Loom – the opening quintet of tracks – plants its flag firmly in the electronic camp, with opening track ‘Four’ ploughing similar sonic furrow to some of Arnalds’ work on the ‘Broadchurch’ soundtrack, all oceanic rhythm and eerie, fizzing synthesizer. Shift forward a few tracks and the flavours take on a more minimal techno edge, with burbling 4am percussion taking over on ‘Wide Open’

Elsewhere the palette is softer, most notably on the Trance Frendz section of the record. Despite its name, this final section is comprised of seven mostly piano-led improvisations that find Frahm in particular in full flow, delicately tinkering Chopin-esque melodies and heart-fluttering cinematic phrases. In the background, piano lids creak and cracking vocals hum in a wonderfully intimate final section. The set’s closing moments are punctuated by experimental synth burps: ‘That’s the one – we found it’, chuckles one or other of the composers. It’s a reminder of the genesis of the project - just two friends goofing around on a night off. If viewed as a unique, and relatively unmediated collection of experimental tracks rather than an album, Collaborative Works is an enchanting listen. What it lacks in structural polish, it makes up for in quality - and you wouldn't expect any less from these two. The bar for a Lads' Night In has just been raised a few notches.