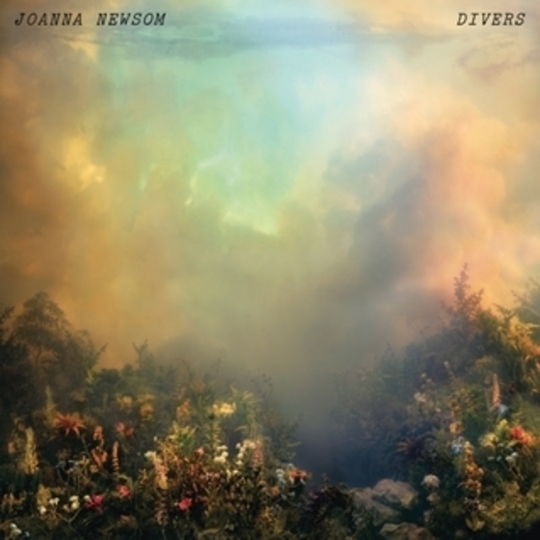 It’s been five years since we’ve heard from Joanna Newsom; five years since she wrapped up her magnificent Have One on Me with the heartbroken lament ‘Does Not Suffice’. In the time since then, time itself has been her main concern. Divers, her extraordinary fourth record, is about many things, but ultimately it’s about humanity: souls ‘stuck together and squashed together, living and dying and making noise and smelling weird and falling in love, creating beauty and fighting with each other,’ as illuminated by the singer in an interview with the Los Angeles Times, wherein time is our omniscient sculptor; the plane in which all things flourish (and wither). At 11 songs totalling 52 minutes in length, its own running time is considerably shorter than that of its predecessor, only its title track exceeding seven minutes. Featuring production by Newsom and Noah Georgeson (who recorded the LP with Steve Albini), it is, by her own admission, her most unified set of songs to date - one she tentatively considers a concept album - stacked with complexities, dizzying intrigue and layer upon layer of meaning, and it is utterly, absolutely enthralling.

A wash of strings and the sound of chattering birds open the Nico Muhly-assisted first song ‘Anecdotes’, before Newsom’s harp, piano and distinctive vocals herald the tune proper, and it’s a doozy. Against a rich backdrop of antique keys, horns and wind instruments, Newsom details a fantastical battlefield unstuck in space and time. Here, during a break in the fighting, she converses with nightjars and poorwills, longs for “temporal infidelity” and is, somehow, a newborn babe and a rueful soldier simultaneously. A sweeping, graceful coda turns the song inside out, positing that time is both static and fluid, something felt over and over again on Divers. It’s a thoroughly, admirably Tralfamadorian notion, and one Newsom mines to riveting effect.

‘Sapokanikan’ follows, a lyrically dense evocation of Percy Shelley and Horace Smith’s Ozymandias sonnets, exploring notions of decay, misinterpretation and all that is irrevocably lost. It zeroes in on New York City’s Greenwich Village (named Sapokanikan by its Native American inhabitants), the ‘potter’s field’ that lies beneath Washington Square Park and the tragic story of John Purroy Mitchel, one of the city’s youngest ever elected mayors. Time, as ever, towers above all. Here, equated to a divine ruler (“some unrecorded and powerful hand”), it is cruel and impassive: the remains of 20,000 people are said to lie under the park Newsom strides through in the song’s Paul Thomas Anderson-directed video, while the ‘Boy Mayor’ of New York City failed to win re-election, later falling to his death from a military aircraft while on a training exercise thanks to an undone seatbelt. “Look, and despair,” repeats Newsom in plaintive falsetto over the song’s closing stretch, echoing Shelley’s poem.

Divers, as we’ve come to expect from Newsom, is a tremendously allusive work, offering reams to unpick and consider, yet it might be her most welcoming, immediately absorbing to date. ‘Sapokanikan’, for example, winds and waltzes its way through various styles and time signatures, guided by an acrobatic vocal turn that confidently steers the way. It is affecting whether you pore over its meaning or not, in Newsom’s melodies, her voice and her delivery: devastating way before you contemplate Shelley and Smith’s verse, catch any of the manifold references or look up Purroy Mitchel’s story. ‘Leaving the City’, the other song put out by Newsom’s long-term label Drag City in the build-up to release, is exhilarating, her brother Peter’s drums adding immeasurably to the effect. “The longer you live, the higher the rent” she states, closing a remarkable passage concerning flight from the city that also dabbles with the themes of legacy dealt with in ‘Sapokanikan’. ‘The Things I Say’ clocks in at two and a half minutes, a yearning, lovely ballad that dissolves into glissando ripples of musical saw; ‘Same Old Man’ is a traditional reimagined, again peppered with references to New York (a place Newsom has, incidentally, left, for the brighter West Coast); while ‘You Will Not Take My Heart Alive’ is a remarkable assertion of defiance, gilded with sprinkles of Mellotron and synth that grace it a ghostly, retro-futuristic edge.

“We came to see time is taller than space is wide,” Newsom sings on ‘Waltz of the 101st Lightborne’; “We bade goodbye to the Great Divide: found unlimited simulacreage to colonise!” The song returns to the ideas and mythic battlefields presented in ‘Anecdotes’ and appearing throughout the album, in which the 101st Lightborne Elite of its title break free from physical laws in order to engage in a cataclysmic war that plays out ad infinitum. It is, for all that, gorgeous; a beautiful, folksy splash of colour and head-spinning ideas that recalls the science fiction of writers like Dan Simmons and, again, Vonnegut. (Writes Billy Pilgrim, the time-jumping protagonist of Slaughterhouse-Five, in a letter attempting to explain his predicament: ‘It is just an illusion we have here on Earth that one moment follows another one, like beads on a string, and that once a moment is gone it is gone forever.’)

These heady concepts inform just about every aspect of Divers, from its striking artwork (photographs by Kim Keever, achieved via the creation of miniature landscapes in aquariums captured as coloured dye swirls through them momentarily before coalescing), to its magical, sprawling title track; from its pretty, shorter numbers to its grand finale, wherein another facet of the record becomes clear. Accompanied by drums, the City of Prague Philharmonic Orchestra and punctuated by the cooing of a mourning dove, ‘Time, as a Symptom’ hinges on Newsom’s quiet realisation that “love is not a symptom of time,” but, rather, “time is just a symptom of love.” Following this, the strings (arranged by Dave Longstreth of Dirty Projectors) begin to stab, plummet and soar and Newsom goes for broke in a bravura finish, singing of “the nullifying, defeating, negating, repeating joy of life,” evoking the nightjar with whom she stood at the start of the song cycle, and issuing a final, powerful imperative - “transcend!” - before ringing out on that word’s prefix. (‘Trans-’ equates to ‘across’, ‘through’ or ‘beyond’: any of which would fit here, especially given that Newsom has described the LP as ‘a sort of narrative loop’ - one in which the first word sung is ‘sending.’)

Not only a deftly realised, enchanting meditation on time and its vagaries, the record is effectively a celebration of what we, as time’s denizens, are able to accomplish within it. Living life bravely, it suggests, should be our primary concern, despite the loss inherent in our very existence, whatever the obstacles lying in wait for us, however daunting it can often feel. These are startlingly beautiful, fiercely inventive songs, couched in the metaphysical, touching on the universal, born from a deeply personal place. Conveyed with sincerity, warmth and the musicianship and love of language and storytelling that sets - has always set - Joanna Newsom apart, Divers is a colossal achievement.