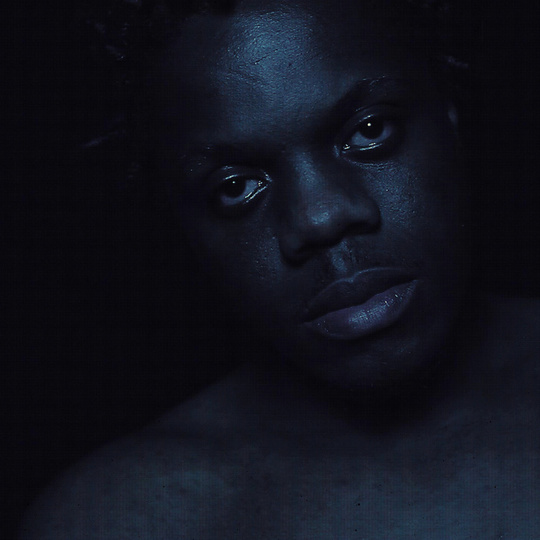 Since his breakthrough in 2009, Kwesi Darko – aka Blue Daisy – has been a bit of an enigma. He pops up here and there, surfaces for just a moment, then heads back to ground again. Darker than Blue, his second album, and first for R&S, sees Darko return to explore a deep, dark sonic territory that at first glance wouldn’t sound out of place on a post-metal album, or in some cases, a particularly harrowing David Lynch movie.

It’s a staggeringly diverse set of songs on display here, and one which does take a fair bit of getting used to. He’s an uncompromising musician, that’s never in doubt, and making this record sit together as a whole must’ve been a pretty hefty proposition - it certainly sounds that way, anyway. From the opening few salvos, ‘My Heart’ sets the pace with a languid, melancholic backdrop - all Fender Rhodes chords and beautiful vocal backing, which easily could’ve been included on a Silver Mt. Zion album, or even that Album Leaf / Sigur Rós collaboration album we never got. The jazzy snares which trip all over ‘Daydreaming’ switch up the atmosphere, sounding not too unlike that last Mount Kimbie album, but with a deadpan, stream-of-consciousness vocal oozing all over it.

There’s a real dark and immediate energy to the whole thing, with a brutal atmosphere which permeates every inch of the record. “I’ve been getting lost in my thoughts, I’m losing my mind” he intones on ‘Alone’, over a jazzy funeral waltz. It’s not a happy listen, by any stretch of the imagination, but in Darko’s catharsis, he sounds at peace - his yearnings for home, or company both highlight a strange but beautiful talent on display.

Musically, it’s such a mixed bag that it’s hard to take in sometimes. The title track is probably the best representation of his strange, smoky world - hi-hats skitter over more of those Rhodes chords as he gets increasingly more animated. It’s a striking halfway point for any album, and the intensity only grows as the track collapses in on itself, screeching guitar solos and all: “Fuck this, man” he laughs, and drops the mic. ‘Six Days’ is a drowsy Tom Waits death waltz, and the darkness only gets darker as ‘Heroine’ tumbles through a David Lynch nightmare-scape of twangy tremolo guitar and slow, sludgy rhythms. Sort of like being drunk in hell. Almost.

‘We’re All Gonna Die’s main refrain of “my girl says this smoke is gonna kill me, but I don’t give a fuck - we’re all gonna die” doesn’t exactly lift the record out of it’s pit of darkness, but all the same, feels strangely at home, taken in context. It’s on ‘Gravediggers’ that he finds his swagger - a bruised, distorted bass riff pinched straight from the David Lynch handbook (no bad thing, by the way) erupts into a Nick Cave-in-Grinderman-mode style beast, hellfire guitars slicing open the darkness to reveal a primal urgency. ‘You And Me’ closes the album, with nothing but a dreamy vocal, soft jazz drums and droney organs - a fitting closer for such a scattered album.

I’m not going to lie, this is a tough listen, but I also think that Blue Daisy wouldn’t have wanted it any other way - this is a brutal, uncompromising record, but one that dares to explore themes and atmospheres that others wouldn’t touch. It’s more black metal than most black metal albums, and has more punk attitude in its second half than most punk bands manage in their entire careers. A visceral and intriguing record, and one that doesn’t always gel, but it at least stands by it’s own convictions.