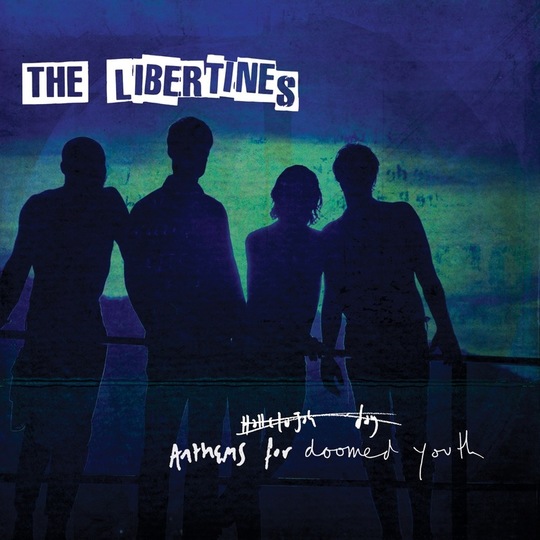 'What’s this twat doing on?'

Someone in the queue at Londis has noticed Pete Doherty on Sky 1’s totes ladz bantz fest Soccer AM on the telly behind the counter.

'I can’t believe these are still fucking going.'

It’s hard to approach a new Libertines album without the baggage, without understanding how much they were loved and hated. Ten years ago and more they were indie rock’s great tragic love story, a poetic mess falling apart before our eyes, an ongoing soap opera with matching tattoos, unannounced gigs in Dalston council flats and homoerotic fan fiction. The press loved them, because what paper wouldn’t love ’andsome boys fucking up their success in the public eye? Most of their songs, especially on their self-titled second album, sounded like they were dragged out of chaos, barely holding it together as if they were being made up on the spot, but somehow, somehow managing to cast a spell of warmth and romance. Like Suede and the Manics before them, like Amanda Palmer across the sea, they were more than a band, they were myth makers, building their own Jerusalem, their own green and pleasant land, their own (alright, alright) Albion, and if you fell in love with that world then you fell hard. Of course If you’re that kind of band, never out of the papers, poured over by indie kid dreamers, then dear god some people are going to fucking hate you, and people did. Just their existence made people angry, which naturally made them all the more glorious.

Even if the music had been pish, just to be loved and hated to the extent the Libertines were in their heyday would still make a new album noteworthy - but there’s more at stake here than that. The oft-overlooked truth of the Libs is that they were really, really good, able to capture the romance of their myth-making and transmit it to their records, which sounded shambolic but were deceptively well put together- they could really play, something that’s often ignored - especially about Doherty - and they earned their place in the great indie pantheon. The Libertines are the only band since the mid-Nineties to manifest mainstream success from cult appeal and actually be worth the ride. It’s something that’s been forgotten in the crack-pipe tabloid whitewash that took place across the last half of the decade.

Which puts a fuckton of pressure on Anthems For Doomed Youth their first album for 11 years. This is the one that’s supposed to prove us right.

Let’s start with what they haven’t done. The suspicion was always that a new Libertines record would be a phone-in, reworking abandoned demos from their early years and generally trying to recapture the spirit of 2002. Happily that’s not the case- only one track from the bad old days, ‘You’re My Waterloo’, made the album cut. Instead, like the other great indie reunion record of 2015, Blur’s Magic Whip, the four piece reassembled in the far east and worked up a record that genuinely moves their legacy forward.

Light on razor sharp indie hits (there’s no ‘Time For Heroes’ or ‘Don’t Look Back Into The Sun’) but heavy on doomed romance and scrappily swooning ballads, Anthems For Doomed Youth (full marks for the title by the way) is a genuine progression, a proper next step by a band on a creative upswing, comfortably worthy of both of its predecessors.

At its best this is a collection of grown-up, minor-key musings focussing on the classic Libertines subject matter of ‘being in the Libertines’. Thus we have the title track, a sepia snapshot of the band’s demise, the sonic equivalent of an old NME cover slowly burning in a fire grate, curling at the edges while the band warm their hands. “We thought that they were brothers, then they half murdered each other” sings Carl Barât, “and did a karaoke turn and murdered our best song”. Then there’s ‘The Milkman’s Horse’, (“they just don’t make that type of world any more”) which manages to be both bitter and nostalgic at the same time, with a melodic chorus glowing with winter warmth despite a less than friendly lyric (“Get out of my dreams you scum”.) Best of all are those moments where they step slightly outside of their own legacy, ‘Dead for Love’, the somber album closer inspired by the death of Doherty’s friend Alan Wass is staggeringly good, the perfect union of Doherty’s dreamy poetry and Barât’s croon, which becomes a tingling howl as the song crescendos. It doesn’t sound like anything they’ve done before, which is as heartening a justification for this album's existence as anything. On the other end of the scale is ‘You’re My Waterloo’, a Doherty-penned weepy dating back a decade and arguably the best thing here, harking to the yearning sadness of ‘For Lovers.’ An oldie it may be, but anyone remembering the scrappy Suede-a-like demo that did the rounds back in the day will note the differences, there’s a pleasing maturity here that imbibes real feeling into the none-more-Pete Tony-Hancock-and-London-train-stations references.

Much of the success can be attributed to producer Jake Gosling, the safe pair of hands who steered Ed Sheeren and One Direction to global smash territory. Producing a Libs album isn’t especially difficult - you stick a guitar in each speaker and make sure the band don’t kill each other - but Gosling works hard at giving the record subtle polish and punch. It’s never glossy, never overproduced, but feels more comfortable with itself than their work with Mick Jones or Bernard Butler, both of which basically turned the mics on and left them to it. Here there’s more attention in the harmonies, the occasional ghosting synth line, melancholy piano or treated drums. It makes this a less exciting album than their two existing classics, both of which sounded like a band pulling magic out of chaos, but a warmer, more substantive experience. It’s the best they’ve sounded.

That said, despite its atmosphere and maturity this isn’t quite a peak. There is some excitement missing, mostly in the more upbeat numbers. ‘Fury of Chonburi’ is completely throw-away, departing your brain about five seconds after it finishes, ‘Glasgow Coma Scale Blues’ is the most 'Libertines-by-numbers' thing here, from its scrappy rock n’ roll riff to its fast-swapped vocals and melody that references/directly lifts Up The Bracket’s ‘Boys In The Band’. The elements never really gel - they’d have relegated this to b-side territory back in the day. The band could do with severing their ties to garage punk altogether, the headrush of their early material may have lit the right fires, but they’re just not that band anymore. The sticky floored indie club is someone else’s territory now (though god knows whose).

Not that decent pop moments are past them, they’ve just moved on from the fizz and bang of their early singles. ‘Fame and Fortune’ is great, a bass-led groover touring the “squats and theatre bars” of London, with a doozy of a chorus. First single ‘Gunga Din’ takes a bit of work but improves with every listen, a woozy, hangover sickened dub-pop about vice and calamity that is definitively Libertines; while opener ‘Barbarians’ has all the elements that make the band work- Gary Powell’s jazzy, octopoid drums, John Hassell’s melody-driven bassline, those spidery twin guitars either side of your ears. It’s a proper racket that eases you back into Libs-land nicely.

Anthems For Doomed Youth does the job it needs to: confirms the Libertines as a proper band with distance from their messy tabloid past. Their reunion isn’t just a cash grab at Noughties nostalgia, but the resuming of a real career. It’s a stylish, likeable work, that while not hitting the peaks of excitement in their early albums has a real consistency and warmth. A solid, quality record with atmosphere and character in spades that proves its creators as an active and current force. Who saw that coming?