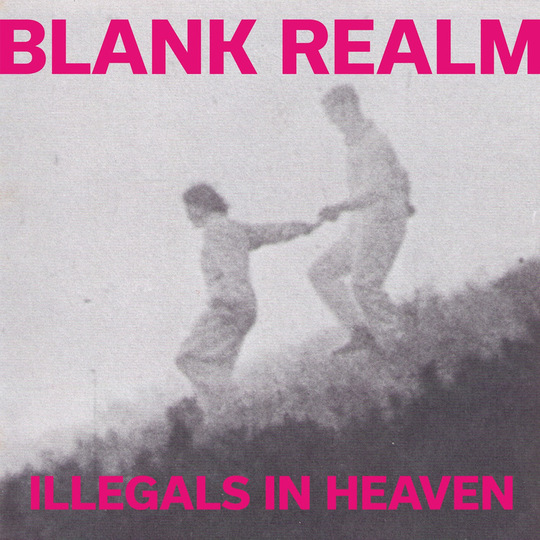 Who the hell doesn’t want some tunes that blast off the headphones and inspire impromptu dance jams? I do! And who the hell wouldn’t want to believe in a group of ambitious folk that could unite fellow weirdos? I DO! Look, when I scrobbled regularly on last.fm, bands always topped my most played charts – not because I consciously avoided solo artists, but because I loved the concept of a band, i.e as a group of like-minded people fighting as one against the rest of the dull world.

Blank Realm are that kind of gang. A family of wicked cool musicians (with their 'spiritual brother' Luke Walsh on guitar), these Aussie folk gel together SO DAMN WELL in their shambolic Velvet Underground-y jams that you yearn to join them, or at least hang out with them and hope their sublime slackness rubs off. But as easy-going as this crew may be, Blank Realm evolve relentlessly, synchronizing grooves without sacrificing that deep-down JOY within. Illegals in Heaven, then, is just the logical next step, the stepping stone to eternal zen for them and us.

Oh, man! I even can’t begin to analyse this album without a big wide grin. The super-keen riffs cut clean like all the best new wave singles - Flock of Seagulls, Billy Idol, the Fixx, YOU KNOW THE ONES - yet the very-human drums chug in the back unadorned, an eager thumping metronome. And Daniel Spencer! Oh, you! He is the channel that converts sheer kinetic energy into love and lust and joy and fun and love.

Together they cannot be resisted. When 'No Views' blasts out the gates, all massive like The Clash but infinitely faster and bumpier, you can’t help but scream and throw yr hands in the air like you’re on a rollercoaster. Likewise for 'Costume Drama', my favorite – AHHHHH those monster riffs! AHHHH those obscene Fall-like synths! AND THAT XYLOPHONE! AHHHH! That little freak in you will wanna bob all over the room.

But, ah. What makes Blank Realm special is how they buoy honesty with levity. It shines through in the middle, like in the campfire ballad 'Dream Date', where Daniel plots romantic getaways and secret meetups for the love of a gal – and nothing beats the couplet ”and when we get married, we’ll drink coconut rum / and when we get married, I won’t carry my gun”. Right after that, the tender but playful 'Flowers in Mind' fast forwards in time, to when “the one that you love stops callin’ / and those autumn leaves already done fallen”. Without banking on cursive Hallmark sentiments, Blank Realm find the silver lining in that whole “better to have loved and lost” situation, with the amorous suggestion that the memory of being adored can last for a lifetime. And, just to prove that silver lining exists, the band rush into the finale in a giddy sprint, so that everyone’s out of breath and wheezing with laughter.

And then there’s the knockout round. First there’s 'Gold', the only time that Sarah Spencer takes the lead on vocals, and she’s so casually gorgeous and everything sounds so '2000 Miles' that you just wanna find someone that you really love and hug ‘em to death to make sure they never ever leave you. Then! Then then then! After the brief romp “Palace of Love”, the coup de grace 'Too Late Now' floats in and Daniel proclaims words like a god of tragedy:

(You must quote this in all caps, or else you’re doing it wrong.)

See what I meant about grabbing that person! AHHH! And then the power chords lurch in, and it’s as profound as the Moody Blues, but far more down-to-earth – sometimes people just disappear, people you could have held dear, and Blank Realm evoke the overwhelming regret in the shuddering riffs.

Indeed, Illegals in Heaven is not an album you ponder about – the words and the grooves stab yr brain and tap fountains of hormones. Blank Realm have done it again, and together they’ll take on the world for love.