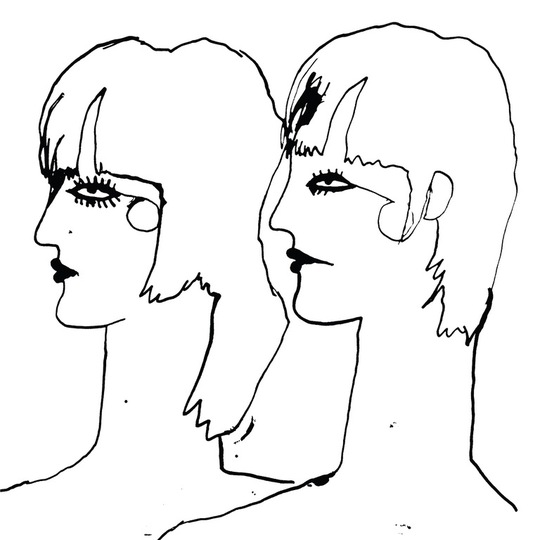 Here’s my impression of Drinks when they got that guitar tone on 'Tim, Do I Like That Dog': 'Ah! It sounds like a rattlesnake having a seizure! Awesome!' Which, funnily enough, is more or less the way I felt about it too.

Hermits on Holiday is the debut record from Drinks, the creative collaboration of Tim Presley (of White Fence, Ty Seagall, and various others), and Cate le Bon (of Cate le Bon). Understood that this is a collaborative effort, the poetically minded press release encourages us to consider it a 'solo project', which—sure, fine. Despite the difference between le Bon’s and Presley’s median outputs, they produce a fresh and rich stylistic centre on Hermits on Holiday. The record is far more avant-garde than any of le Bon’s solo material, and calls on the most antisocial aspects of Presley’s. It’s gnarled, it’s confounding, it’s strong-armed, and you’re sure it’s winking at you every once in awhile.

The opener 'Laying Down Rock' and the title track are two such moments. Each are songs in the strictest formalist sense, in that they have verses and choruses and intros and outros. On the far other side of the spectrum, there are experimental, anti-formalist romps like 'She Walks So Fast' and 'Tim, Do I Like That Dog'. Held together by, respectively, recurrent guitar or recurrent bass riffs, alongside bare lyrical motifs, each features a good deal of spur-of-the-moment-sounding percussion and lead guitar. Each are disorienting, but neither dive fully into noise territory. So, instead of pure chaos, the songs convey both whimsicality and control. If you’re along for the ride, you’ll be able to make sense of what’s going on, but you won’t do it by tapping your foot.

To be sure, the style is aided enormously by some brilliant musicianship. Pay attention to the refrain of 'Cannon Mouth', where the marvellously complicated percussion nestles the energy in a higher realm. Or, the lead guitar interplay on 'Focus On the Street', which I assume is a friendly duel between Tim and Cate. Or, anytime they introduce the tasteful synth(?), which comes across like a crystalline insect patrolling the mix. Special props to the bass player too—innumerable groovy licks throughout.

As for Tim and Cate’s purported oneness, I can give a pretty solid endorsement. Each sings with a cheeky ambivalence á la Nico/Mick Jagger in his less orgasmic moments. Despite what seems to be intentional androgyny, you certainly won’t mistake the male for the female, but you could well lose track of who’s playing which guitar, when. I’m admittedly not enough of a knowledge powerhouse to make the subtle discernment between le Bon’s and Presley’s styles. But if you are, you might lose track, too.

I’ll admit being more taken by the songs than by the experimental passages, but at no point do I write the latter off as mere wankery. That could well be due to the record’s moderate length (nine tracks at 42:03), or because when they do go off into avant-garde country, they tend to come back with something that goes down easy. Case in point: when the attractive 'Hermits on Holiday' follows the comparatively unsightly 'She Walks So Fast'; and, when 'Cheerio' cleanses the palate after 'Spilt the Beans' and 'Tim, Do I Like That Dog' give you a whole lot to chew on.