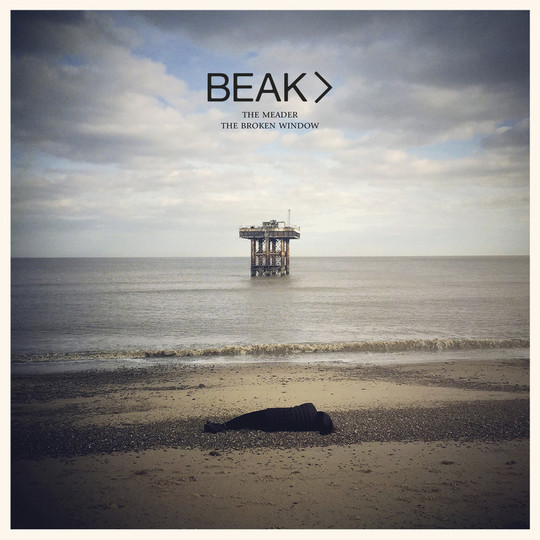 Bristol trio BEAK> are back with a new EP, and after two full-length albums and a few other bits and bobs to boot, it’s exciting to find out which way they’re going to turn next. Famed at first for including one third of Portishead in the form of Geoff Barrow, BEAK> are now known in their own right for a solid offering of krautrockian synth sensation set against a disturbing backdrop of booming sturdy-as-a-fortress beats.

This year they’ve settled on a split EP with <KAEB, an as-yet unheard of band featuring all the same band members but perhaps lined up in a slightly different order. It’s possible they’ve swapped clothes or even instruments for the occasion. But how do you know when you’re experiencing some BEAK> as opposed to the newly emerged <KAEB? That’s easy, the difference is that

‘The Meader’ and ‘Broken Window’ are typical BEAK> fare. You’ve got some stomping drums, guitars all truculent and bassy, the crunchy build-up of layers, more than a slight nod to the hypnotic world of minimalism. Whilst ‘The Meader’ feels inward-looking, claustrophobic and tooth-janglingly discordant (in a sort of good way), it’s also surprisingly short. It feels like someone cut it in half and threw away the ending. ‘Broken Window’ by contrast spreads itself out and swells into your ears, solid enough to lean on. It’s like that bit out of a sci-fi when the main guy comes around a corner and feels like he’s being followed by something, but like the something might not be human and then he quickens his pace but still it’s there at his back. He starts sweating and his feet kick into a jog but now the thing is getting closer. And you just don’t know if he’s going to make it. That’s the kind of song it is.

<KAEB, however, are an entirely different beast. This is where the trio (and their otherwise floating members) go to try something a little bit new without having to listen to people going on about how the band have changed and not stayed true to their roots. ‘When We Fall’, the standout track of the EP for me at least, starts out with some lovely arpeggios and a gentle melodic riff. It is a wistful hug to the previous tracks’ cold uncompromising shrug. Is this kind of music going to appeal to typical BEAK> fans? Not necessarily. But the melancholy is as beautiful as the other tracks are harsh. It even has some sad sounding violins in and everything.

So let’s not leave out the final track then, where things take another turn for the experimental. California rapper/producer Jonwayne floats in over church choir-type harmonies and gets a bit wordy. It’s not going to be everyone’s cup of tea and it sounds a bit like the second half of the track is just a repeat of the first half, but then I might have zoned out a bit.

But that’s what happens when you try to mix things up. BEAK> <KAEB are like a Kellogg’s variety pack. There’s something in it for everyone, but because the packets are so darned small, somehow you come away a little unsatisfied.