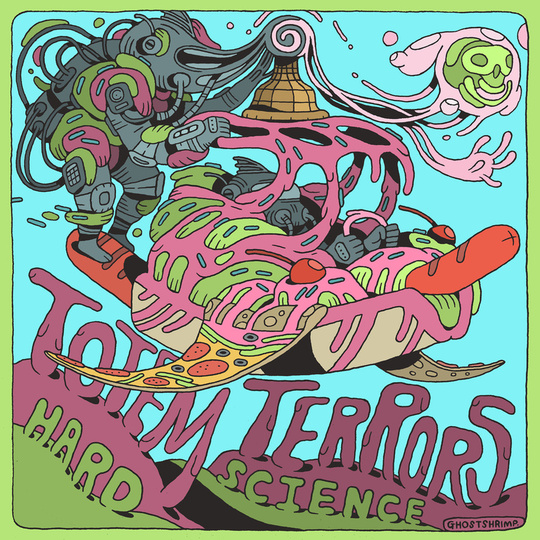 Not gonna lie - I feel like I’m about to hack the system.

I’ve been following Totem Terrors for a while now. Or, rather, I’ve been following the trail of cookie crumbs left by their singles and radio sessions and shout-out toga parties. They bashed out these quirky, twisty tunes with their trusty drum machine, tossing between snarky sing-alongs and exaggerated glamor and slaphappy violence, but always with this strictly Wire-esque – no, Colin Newman-esque economy. (Both versions of 'Not Me' apply here.) Which, of course, delighted me to no end.

And now they’re back, and they still make me wanna jump up and down like a pockmarked college kid outcast that never grew up.

Now, you might deduce from this that our duo is only good for a laugh, and not suited to treading on singer-songwriter-y egg shells. And sure, some of the heavier tracks deal the same hammer-thick blows ('Narrowman', for instance, isn’t that different from 'Deathwish MF'. But even if you were right, that’d be no blow to Totem Terrors – half the charm is their deliberately obtuse lyrics, mundane observations blown up into the kind of tedious paranoia that should resonate with any introverted soul. The throbbing, McClusky-esque 'Bristol Defector Hex' takes one shitty Friday night (you know the sort – when you’ve asked your pals if they’re up for anything, and each one turns you down) and projects a lifetime of no-shows – “ice skating for one…romantic evening by the fire, for one - all the way down to ”a funeral for one”.

However, Hard Science has its somber moments, too. And when Totem Terrors stray from their token tomfoolery, it’s glorious – indeed, 'UNVRSY' could be the crown jewel of the album, a straight-up Nineties college rock ballad; or 'Worried', a wonderful Wedding Present-y number that shifts gears between jangly and heavy; or 'Swan Song', which broods and swirls with a touch of pop whimsy. In these, Smith speaks for the unassuming introverted type of girl, the sort that gets run over all the time; and for anyone who’s felt timid and inadequate in social situations, the enormous fuzzy guitars that rip into these tracks just feel GREAT.

Totem Terrors could have stopped with the catharsis on 'UNVRSY', and we’d all be warm and happy – but no, instead Hicks follows up immediately with 'None Under' and the jaunty couplet “well, whaddaya know, I didn’t fall into the sea / well, whaddaya know, I didn’t put a knife in me.” Snootier listeners might say this “ruins” the ending – to them I say pffffffft. It’s way more fun to end on a smirk than a sigh. Hard Science does recycle a few of its tricks, but otherwise it’s a sheer blast and a swift punch in the gut.