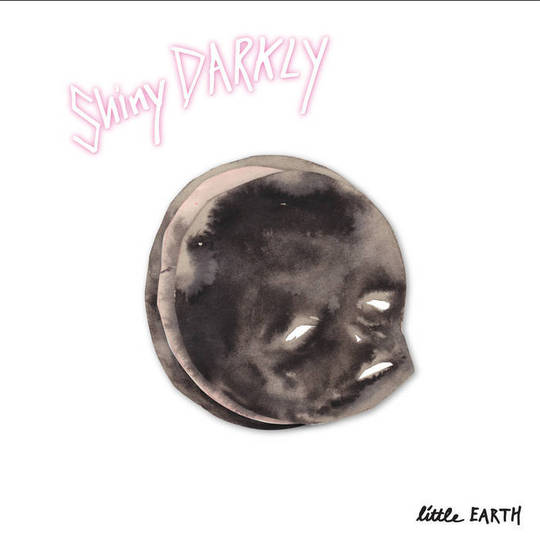 Shiny Darkly have sat firmly on Drowned In Sound's radar since their eye-opening performance at 2012's SPOT Festival. Although hailing from Copenhagen, their psychedelic post-punk owed more to the likes of Bauhaus, The Gun Club and more recently The Horrors. Also sharing an aesthetic with all three in their preference of wearing all things black, the trio sounded intrinsically out of place in their homeland and all the more exciting for it. So it's no real surprise that their first long player has received a big push over here a year after its initial release in Denmark.

Having hinted at potentially great things since their self-titled debut EP came out three years ago, Little Earth doesn't disappoint. All the elements contained within those six recordings and further enhanced during the band's live show can be found across various parts of the album's nine tracks. Essentially centered around Kristoffer Bech, whose distinctive vocals and soaring guitar solos act as a rubber stamp on Little Earth from start to finish. Although not necessarily the most original band on the planet, its Bech's diminutive presence that ensures Shiny Darkly retain an identity of their own, which ultimately serves theirs and the listener's purpose here.

For the most part, Little Earth sticks rigidly to the gothic side of post-punk's tried and tested formula. The title track recalls The Birthday Party's gloomiest excesses, while recent single 'Animal Fate' marries new wave sensibilities with a sinister undercurrent courtesy of Bech's heavily effected vocals to maximum effect.

Even better is the thundering 'Soft Skin' which takes its cue from Archie Bronson Outfit along with 'Underworlds' and its insidious lollop which suggests Shiny Darkly's best ideas occur when thinking outside of the box. Such nuances don't come any better than on album closer 'Dead Stars', which at nine-and-a-half minutes long borders on the epic and deservedly so. By far their most experimental musical excursion to date, there's elements of Iceage at their most confrontational and Texan psych gods The Black Angels alongside Shiny Darkly's more familiar wares. Bass player Oliver Matthew Volz comes to the fore here, steering its course from the opening note to the deafening squall that brings both song and album to a halt.

Elsewhere, it's a case of business as usual and if that closing gambit is anything to go by, the possibilities for expansion are endless.

You're Going to Make It