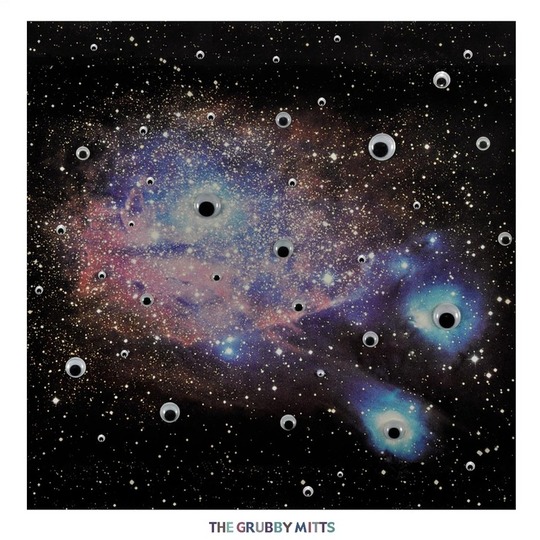 As an artist dealing in bold, big and beautiful installation pieces as well as the leader of the deliciously oxymoronic ‘Maximum Irony! Maximum Sincerity!’ art group, Andy Holden has carved out an appealing niche as Bedford’s (only?) renaissance man. While a transition into music may appear more head than heart where some artists are concerned, the fact that The Grubby Mitts have been together in one form or another since their secondary school days throws an instant dampener on such ideas. The fact that his Lost Toy label has also released music by the likes of the frantically excellent Ice, Sea, Dead People also suggests an amount of insight when it comes to banging out a tune.

What nobody would rightly expect is an album quite as majestic, loveable, challenging and outright brilliant as the one we’re dealing with here. What the World Needs Now… is an outlandish, sometimes overwhelming exercise in sonic, thematic world building unlike anything else released thus far this year. In fact that may be an understatement; it’s hard to recall a record of such delicious complexity that was simultaneously able to offer up anthems alongside the avant-garde in such a convincing, moving fashion.

What The Grubby Mitts seem to be going for here is an aural world of repetition combined with shifting instrumentation, extreme melancholy tempered by childlike optimism – a world of late night pub poetry, intergalactic romance, sexual, natural ambiguity and soaring, speechless humanity. The ambition alone is admirable, but the fact that they largely achieve these aims is truly remarkable.

Songs like ‘Pessimism of the Intellect, Optimism of the Will’ offer a seemingly random lyric list – “Roses, cinema scenes, costumes, the world of sport…cacti, aviation series, music hall…types of buildings…celebrities…self-portraits…bicycles, trick riders, battle of Waterloo” from the mouth of Holden while the rest of the band intone the album’s title. We’re dealing in purposeful confusion, articulate obfuscation that somehow, with its clash of major and minor shifts, teases out a bewildered, bewildering emotional response in the listener.

There’s no shortage of spine-tingle to be found on the miraculous single ‘To a Friend’s House the Way Is Never Long’. Based on complex rounds of percussion and vocal hand-offs this accordion-lead anthem is uniquely tender and, thanks largely to its teardrop bassline, pretty much unforgettable. When it reaches its choral, clapping, crashing cymbal climax replete with rolling snare and dawnbreak trumpet the heart can’t help but rise in your chest. Its simple, naïve sentiment is effortlessly open-handed and open-hearted.

Much the same can be said for the album’s unique closer ‘Goodbye If You Call That Gone’ on which a children’s choir take the lead vocal on a funeral lament that somehow grasps the last straws of optimism from the rabid jaws of unbearable loss. Not only does the song provide a suitably rousing end to such a record but also provides an antidote to a late-period lull in quality.

That’s the only real problem with this record – offering up 17 songs is more a move for a double album rather than a tentative debut but while the majority of the music here is, indeed, remarkable, there is also an element of fatigue involved when clambering through the disparate, sometimes baffling moments on show here. – unnecessary murder ballad ‘The Unquiet Grave’ being a case in point.

This is a minor quibble though, finding fault for the sake of attempting objectivity if you will. An album that plays home to ‘Worm of Eternal Return’, all obtuse, luscious poetry (“The locusts of lust, the octopus of generosity, the cabbage white of love”) and the barenaked refrain “Whatever else I am / I am not in your arms” is hard to view in any way other than generously. These are the sounds of the indie arena band freshly deranged, lysergic, profoundly artful and intelligent yet absolutely accessible.

This is a lengthy journey that took the band themselves eight years to put together. This is an album of eccentricity that reaches inside with its melodies and touches deeply, all the while remaining inventive, experimental, vital, charmed and charming.