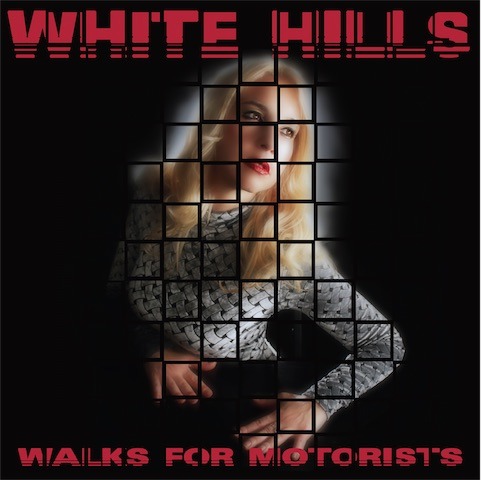 There are moments, more than a few of them on Walks for Motorists where the alchemy is programmed just perfectly and something happens.»

White Hills are proponents of psychedelia as transformation. The music made by Dave W. and Ego Sensation is risky and cutting edge, rooted in dystopian futurism and hyper-conscious of society's constant desire for a new and better drug. That progressive aesthetic is at the heart of White Hills' newest album Walks For Motorists, a radically stripped-down record that emphasizes rhythm and groove. The album bursts forth with a new kind of intensity, one born out of laser-focused precision and detail-oriented songwriting. Possibly surprising to fans familiar with the Hawkwindian guitar squall of earlier albums, the songs on Walks For Motorists began as a keyboard melody or bass line, and several songs on the album don't even feature guitar at all. This is propulsive, open music, surreal to its core but made to inspire people to get out of their seats and move. 'Walks For Motorists' was recorded with David Wrench (Caribou, Bear in Heaven, FKA Twigs, Owen Pallet) at Bryn Derwen Recording Studio in Bethesda, Wales which borders the Snowdonia National Forest. The band had 24-hour access to the studio, which allowed them to work whenever inspiration struck. Wrench's expertise producing and mixing electronic music was an essential asset when perfecting the crisp tones heard throughout the record. This is the first album the band has recorded outside of New York City, and the vast, rolling Welsh landscape that surrounded the studio influenced the album's uncluttered sound. 'Walks For Motorists' is also White Hills' most diverse album to date. Fuzzed-out rockers sit comfortably next to kraut-infused grooves, and there are more vocal contributions from Ego than ever before.
description from www.roughtrade.com