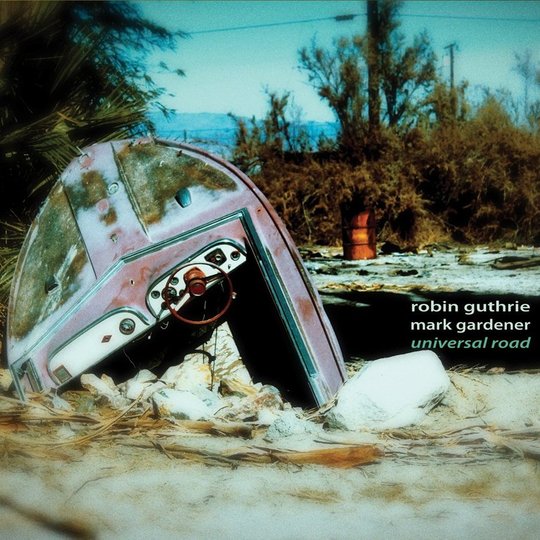 While all the attention currently being focused on Mark Gardener understandably surrounds the reformation of another band, it would be churlish to dismiss his contributions to music over Ride's two decade hiatus. Collaborations with fellow Oxford experimentalists Goldrush, Dead Horse One and The Brian Jonestown Massacre along with a couple of singles in his own right all bore enticing fruit of a deliciously ripened nature. So when it was announced a couple of years ago that he was working on an album with Robin Guthrie expectations were rightfully high.

As with Gardener, Guthrie also finds himself forever stuck with the tag 'former Cocteau Twin' despite having put out 14 albums since that band's final release nearly 20 years ago. Having previously worked together on 2012's 'The Places We Go', Universal Road offers a more expansive view into the opulent chemistry between its two creators.

However, those expecting a retread of either's past landscapes are in for a surprise. And a pleasant one at that. Rather than focus on ethereal soundscapes or sonic euphoria, Universal Road concentrates on a series of defined melodies and song structures. Ten of them to be precise, and as a result renders itself one of 2015's most astutely constructed collections.

Opening with the quaint ambience of the title track, Gardener imploring, "I carry you wherever I go" over Guthrie's deft guitar arrangement. It sets the scene for an album rich in texture and substance throughout. The most obvious comparative sonically would be Kingdom of Rust-era Doves, none more so than on swirling lullaby 'Dice'.

It's on the acoustic lament 'Amnesia', reflective 'Reason' and similarly poised 'Old Friend' where Gardener's lyrical prowess comes to the fore. Reminiscing about the past, there's a touching moment in the latter where he declares, "I need a place to hide". Proceedings take a more upbeat turn on 'Yesterday's News', again spurred on by Guthrie's signature glissando effected guitar sound.

'Cry for Survival' finds itself built around slide guitar passages while 'Sometime' once again is heavily accentuated upon Guthrie's distinctive crescendo, Gardener stating "No getting old before our time" from the outset. Entering the album's final third, 'Triumphant' lives up to its buoyant title. "Sometimes I feel like I'm finally waking up" intones Gardener over a jaunty melody while hypnotic closer 'Blind' ("There are things we'll never see") proves both definitive and grandiose of its creators' intent and execution.

Although the shoegaze revival may be in full flow, Universal Road provides a timely reminder that some of its main protagonists had much more to offer than floppy fringes and extensive pedal racks.