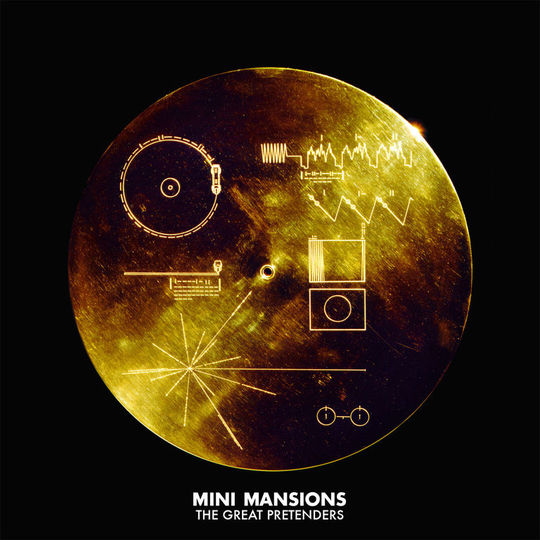 Featuring a Queen of the Stone Age on bass; having Alex Turner and Brian Wilson guesting on their new album; supporting Royal Blood on tour; these are all things could raise expectations too high for any band. A lesser band would buckle under the strain. Not Mini Mansions. All of these headline-grabbing elements pale in to insignificance next the sheer weight of downright brilliant songs which abound on The Great Pretenders.

DiS recently ran a fine feature article on Mini Mansions. If you’ve yet to take the time to read it, I’d strongly suggest you do so now before continuing with this review. It’d be great if you came back afterwards though. Just in case you don’t, it’s a great album and you owe it to yourself to buy it.

One of the biggest compliments I could pay this fine album is that it took me a long time to notice when Brian Wilson started singing on ‘Any Emotions’. This is no slight on Mr Wilson. Far from it. Rather, by the time he adds his pure tones to the track, Mini Mansions already had me under their spell. Opener ‘Freakout!’ builds to a glorious stomp of a chorus, a squelching bass pulse driving the track along underneath ricocheting piano, and the kind of vocal inflexions not seen in these parts since Mika (it’s better than that though). This is the sound of a band enjoying themselves. It is wondrous. And it only gets better from there.

‘Death Is a Girl’ has so many hooks in the period prior to the start of the first verse that your brain doesn’t know where to look. Does it convulse to the insistent beat? Does it sway to the rolling bass? Does it nod appreciatively to the finely pitched synth melody? What to do? Before you can decide, we’re bouncing through a rapid-fire verse, before sweeping in to the chorus. “Death is a girl and she’s only one dance away” we’re told, while we’re living “in a world where there’s only one day”. No idea what it means, but I’m on board and ready to sign my life away.

‘Creeps’ slows things down, and ‘Fantasy’ speeds them back up, with some clever, very musical chords, and a nice change of gear into a pre-chorus, leading to an even more elastic chorus. Confused? You might be. It’s fantastic though. This is all before Mr Wilson makes his entrance on the entrancing ‘Any Emotions’, a woozy trip to the land of psychedelia.

There really are no missteps here. Alex Turner’s turn, a signature verse full of wit and vigour, adds to the off-kilter ‘Vertigo’ but does not dominate it. Again, the combination of musical finesse, bulletproof choruses, and the organ work, a winning factor throughout the album, are the key features.

For me, the key pair of songs here, though are ‘Mirror Mountain’, which takes things in a more aggressive psych direction, showing another side to this multi-faceted act, and the track that follows it, ‘Heart’, which verges on chamber pop and is suffused with emotion.

Rarely has a band come so far out of leftfield to impinge themselves so deeply on my consciousness. Mini Mansions may have released one album in 2009 (and be assured I will be seeking it out) but this feels like the birth of a truly important new act many years in the gestation. If they don’t take over pop radio this year it’ll be another sure sign of the lack of justice in Musicworld. With any luck, we’ll all know all of these songs by the end of the year. A great, and fun, album,