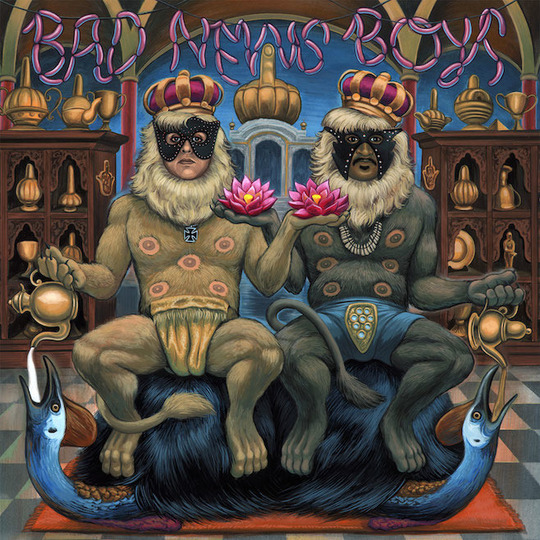 Anybody who's had the pleasure of catching King Khan live will know this guy can rouse a riotous storm of oddball rock n' roll. His live act is as much a visual spectacle as it is musical, with Khan wailing and flailing in the latest addition to his wonderfully cosmopolitan wardrobe. Alas, his studio work has never quite captured that same fervent energy but Bad News Boys, the first BBQ Show record in just over five years, comes pretty damn close.

Whether he's rocking out with BBQ cohort Mark Sultan or his fully fledged psychedelic entourage The Shrines, Khan manages to ripen the primal seed of rock'n'roll with an infectious energy. The pair are also extremely talented vocalists in their own right, treading a diverse range of expressive styles over the album's modest 32-minute run time. Beginning with melodic doo-wop throwback 'Alone Again', the breezy yet soulful vocals kick open the album in playful spirit. “When you say it's overblown/ you'll never be alone again/ you're alone again/ you're alone again” is as hefty an ear worm as any given Khan's penchant for a killer chorus.

'Buy Bye Buai' is a gorgeous Sixties-tinged soul ballad crooned with dramatic inflection by BBQ. Cynics may cry about the band's reliance on a definitively retro sound but when the harmonies are as beautifully ramshackle as this, who cares? With that said, there's another side to Bad News Boys that doesn't rear its head until the fecal minded punk mayhem of 'D.F.O' kicks in. “Diarrhoea fuck off” the pair repeatedly scream as they thrash their instruments in reckless abandon. It's kinda dumb but rock n' roll works best when kept simple and your message can't get any clearer than giving the finger to your explosive downstairs.

The consistent shift in musical flow is ultimately what makes this such a rewarding listen. At first you may wish they'd forfeit the chaotic punk numbers for some more of that smooth guitar twang but hey, this is a record that sits a tender ode to a first kiss (what about the chance that we took/ when we first kissed/ oh what bliss/ it never felt like this) next to the severely pissed off sounding non-closer 'Zen Machines' (the album's only real dud).

At its core, Bad News Boys is a joyous celebration of all things rock'n'roll by two guys who seem to have it running in their blood. When you've got the cartoonish psychedelia of 'Snackin' After Midnight' (“what's that sound that I adore/ who's that choppin' at my door/... a crunch, crunch”) mere minutes away from a diarrhoea hate anthem; it's unlikely you'll find yourself bored for long.