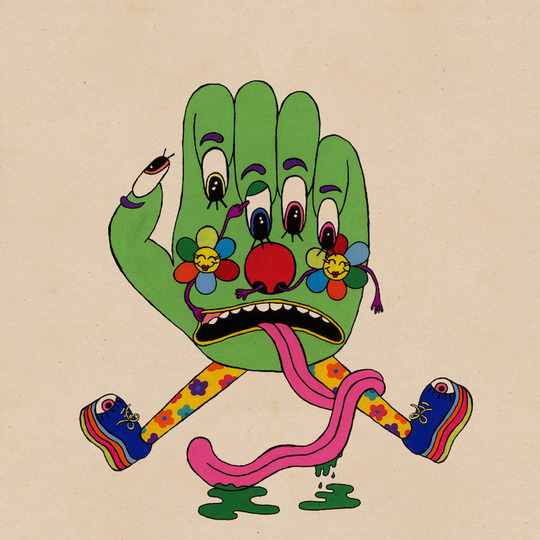 The idea of a 'stripped back' Dan Deacon album isn't, frankly, the most appealing thing in the world. Having firmly established himself as one of electronic music's more engaging crafters, it's understandable to greet his move back to 'a simpler way of writing and recording' with some degree of trepidation. Then you stick on the first track of Gliss Riffer and kick yourself for doubting the guy.

While certainly a more delicate dance than 2012's propulsive America, the Baltimore resident's latest dispatch favours his maximal approach to arrangements. Where that record boasted a wide cast of characters and instrumentation, Gliss Riffer immediately feels more introspective - though not introverted - as Deacon allows his voice more leeway than usual. Case in point; the soothing feminine lilt that grounds tranquil opener 'Feel the Lightning', those dulcet tones no well-selected guest spot but rather Deacon himself.

More than just a pleasing foundation, they make sense of his more jumbled robotic speech, providing a guiding light when he's through regaling us with a story concerning thousands of eyes, hundreds of hands, oceans, skies, Tom Petty and Johnny Depp. And that's just one verse. 'Sheathed Wings' is just as busy and anything but guarded, constantly moving forward and looking to get "that little bit closer, that little bit…". Drum machines snap like pincers and Deacon again relies on his numerous vocal tricks to carry the load. Sonically, it's busy business as usual. 'When I Was Done Dying', however, is the closest we get to wooden six-string heroics. His acoustic timbre is more akin to a bunch of antique wind-up toys let loose as a sea shanty unfolds nearby. Once again his own cast of thousands, Deacon runs the vocal gamut, layering and countering with each fresh line.

As a cluster of processed voices begin to swarm, the trippy, paranoia-flecked 'Meme Generator' emerges as the kind of odd shuffle Nobuo Uematsu might have come up with for Final Fantasy VII's Wall Market were he feeling a touch more adventurous. Unfortunately, that's a sentiment that somewhat extends to Gliss Riffer's author. Too often the man feels strangely hidden away on a record where a less opaque presence is required. Though his personal pitch gets a good deal of play, we receive snatches of character, that potential in-depth introspection kept at bay. There's the sense that he is dealing with his own mortality in places - most notably the addresses found within 'Mind On Fire' and the fantastic 'Learning to Relax' - and asking The Big Questions, but it feels that little bit out of reach. Sure, that's the point - Dan Deacon has always favoured clash over clarity, but it means that his newest creation is left light on emotional weight.

The tracks that make it up are all pretty, all impressively constructed, all exquisitely presented and yet they lack a certain key connection as found on the likes of 'Snookered' and 'Prettyboy'. 'When I Was Done Dying' comes very, very close but there's still that pivotal piece absent. In a similar vein, the otherwise feverish 'Mind On Fire' concludes with a mild whimper when it might have provoked whiplash. Such reservations threaten to paint Gliss Riffer as a notably weaker entry in the Deacon canon but that really isn't the case. He has clearly poured every bit of himself into this project - including handling the excellent production - and it's less that he came up short and more that the focus was perhaps too steeled. Still, this is an often bold and sometimes brilliant offering, even if its heart is more mechanical than you may hope for.