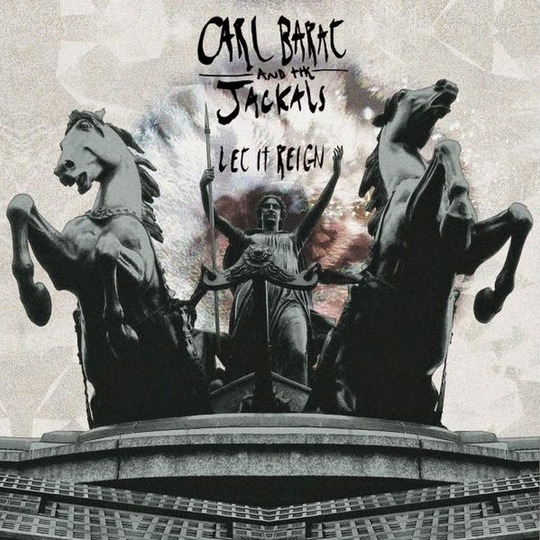 No matter how ambivalent you feel about The Libertines’ on-going reunion, you have to imagine that you probably feel more warmly about it than The Jackals, the band recruited by Carl Barât via an elaborate open audition process pretty much immediately before announcing that he was getting his much more famous and successful other group back together.

Still, Barât always seemed like a decent sort – at least by contrast to you-know-who – and it’s to his credit, generally, that he didn’t just sack the entire Jackals project off the second the Libs reunion presumably alleviated any financial concerns he might have for the next decade or so. Let It Reign, then, is musically probably the most Libertines-sounding material that either Barât or that Doherty chap have put out since the group disbanded: a full rock band effort, without the polish of Barât’s Dirty Pretty Things or the eccentricities of Doherty’s Babyshambles.

Is this a good thing? It’s funny: in 2002, the Libertines’ bone-rattling retro punk and shambolically literate lyrics felt like an antidote to the lightweight dance-pop and indie-lite clagging up the airwaves. It would be fair to say that we’re not exactly short of lightweight dance-pop and indie-lite in 2015, but it’s hard to get massively enthusiastic about Barât’s latest incarnation.

Partly that’s because he’s not exactly a scrappy outsider now, partly because whatever residual romance there is left over from The Libertines now resides with the actual Libertines.

Mostly, though, there's a dearth of great songs: arguably there are tracks here on a par with 'Bang Bang You're Dead', but certainly there's no 'What A Waster' or 'Can't Stand Me Now'. And the desire to contrast and compare isn't exactly stymied by the fact the names of the first three songs – ‘Glory Days’, ‘Victory Gin’ and ‘Summer in the Trenches’ – could have been knocked out by a random Libertines song title generator.

Still, the sheer kinetic whump of ‘Glory Days’ reminds you that Barât isn’t just some fey bloke from the early Noughties, but a living, breathing, MAN. A man who likes The Clash a lot, the song all screeching guitars, Strummery howl/mutter and a disarmingly funky beat. The lyrics… the lyrics are a bit weird, castigating somebody who’s been to prison for his reckless actions, which include driving somebody to a suicide attempt… could it be a reference to Doherty and the whole, terrible Mark Blanco business? I mean, probably not, but it’s difficult not to feel slightly uncomfortable about the song… which perversely gives it a level of frisson that’s lacking elsewhere.

Moving on, ‘Victory Gin’ is a Nirvana-aping knockabout with an agreeable pissed-bloke-down-the-pub chorus (“I am not afraid of anyone, I defy anyone to tell me I am wrong”); ‘Summer in the Trenches’ bounds along in sprightly but slightly wasted fashion, like a rocky early Blur song; generally it’s big, fuzzy guitars and manlyenthusiasm from Barat, with the odd moment of woozy balladeering (see: ‘Beginning to See’). The Jackals produce a thicker and meatier sound than Barât's previous bands, and generally if you're looking for an uncomplicated indie rock record they do the trick: they’re not subtle, but they can bash out a big, dirty melody in a way that’s almost become a lost art.

Still, the Libertines were genuinely about more than just knocking out pleasant retro tunes, and ultimately there’s none of their tension, their darkness, their sense of spontaneity or imminent collapse on Let It Reign. And sure, it's a different project, but it’s too musically similar to be able to shy from comparisons. As a warm up exercise for Barât’s musical muscles and an honouring of a debt to The Jackals, Let It Reign is absolutely fine. But Libertines album number three will need to deliver a lot more than this.