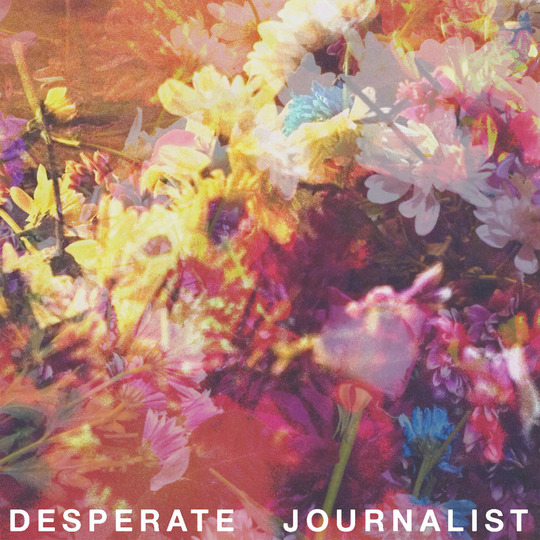 With apologies to Paul Morley and all those desperate journalists who continue to struggle in an ongoing meaningful review situation...

Aaah! More shrewdly tormented youths proffering up their righteous indignation in the Sturm und Drang of post-post-punk. But wait. This London quartet deserve the acclaim. The confidence of their self-titled debut, delivered in 11 self-aware, but utterly unselfconscious tracks which are reminiscent in vivacity and verve to their tremendous EP ’Cristina’. The result is an unyielding long player that eddies and surges, doing more to please than disappoint. Desperate Journalist might conform to a formula, but it’s quite marvellous.

Desperate Journalist aren’t just making great pop. They take tropes of a long established alternative scene and package it in a self-assured froth. Which should feel derivative, but seems fresher now than at almost anytime in the past three decades. The effortless grace to their sound suspends belief in what you thought you knew. These 11 little ditties embellished with the kind of tremendous sensation that elevates them from the ordinary to see them try and soar stratospheric. Well good luck to them.

The group operate with unchecked passion. Simon Drowner (bass) Rob Hardy (guitar) and Caz Hellbent (drums) perform with a vigour that’s only compounded by their knack for the tautest of ohrwurms. Guitar and bass tintinnabulate in the “voluptuous abyss” between complexity and brutalism. Hardy’s 12-string shrills and shimmers with turbulent ardour only matched by Drowners’ murmurous precision. While Hellbent’s percussive aggression gads with a Rimbaudian restlessness. An impenetrable foundation that allows them to bind caliginosity and radiance as one.

It’s this which lays the bedrock for Jo Bevan’s mellifluous vocals. Her articulation of mundanity, angst and heartache building a Babel, between dulcet subtleties (’Control’), sprightly contortions (‘O’) and simmering heretical fury (’Eulogy’). Bevan’s voice caught amongst the sledgehammer remonstrations of Jenny Beth, the winsome urgency of Rose Carlotti and the supple awe of Lesley Woods. Of course Bevan is none of these women, but she shelters in the shade of their astute, literate deliveries and flourishes.

Desperate Journalist melts with strident yet unassuming songs. ‘Remainder’ and ‘Happening’ are hairbrush sing-alongs of anthemic subtlety. ‘Distance’ and ‘Cement’ are wistful soundtracks to an overcast trudge across wet sand. While ’Cristina’ and ‘Heartbeats’ fizz like burning stars. Indie hymnals, just at home in the murk of a basement club and the strobe lit concert hall, as the solitary bedroom. Walls diffused with posters of bands, a silent audience that reflects your wanton heart.

There are some who will whisper that in 2015 people shouldn't be allowed to get away with things like this. It is, after all, a journey tramped by a thousand innominate bands. But what makes Desperate Journalist’s venture worthwhile is their luminous energy. It is perhaps part of their masterplan, to subsume the past through deft assimilation. To make us forget there even was a past. Desperate Journalist are trying to tell us something. They are trying to tell us they have arrived.