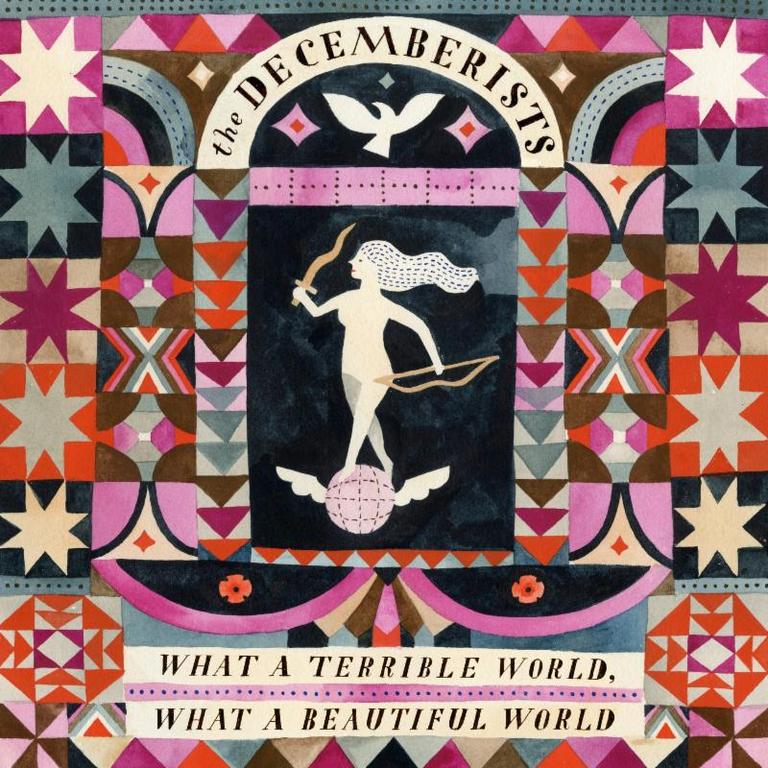 The Decemberists - What a Terrible World, What a Beautiful World

A band at the peak of their powers having their cake and eating it too.»

'What A Terrible World, What A Beautiful World' is The Decemberists' seventh album. It's the band's most varied and dynamic work, both musically and emotionally. Since their last album, 'The King Is Dead', which went to No.1 in the US, the band have contributed a song to 'The Hunger Games' soundtrack and appeared in 'The Simpsons'. Colin Meloy, the band's frontman, has also been working on the 'Wildwood' series - a narrative saga about two seventh-graders drawn into a hidden, magical forest, illustrated by his wife, Carson Ellis. Many songs on the new record represent the more personal side of Colin Meloy's songwriting, a change from the strong narrative thrust that characterized much of The Decemberists' work. "Writing books as this raw, fantastic narrator has been the outlet for that part of my brain," he says. "Having a family, having kids, having this career, getting older - all of these things have made me look more inward. So some of these songs are among the more intimately personal songs I've ever written." Perhaps most notable is '12-17-12', a song named for - and inspired by - the date that President Obama addressed the nation following the Newtown school shootings and read the names of the victims. "I watched that speech and was hit by a sense of helplessness, but also the message of 'Hold your family close.'" This bewildering, conflicted feeling came out in a phrase near the end of the song - "what a terrible world, what a beautiful world" - that gave the album its title. • Ultimately, 'What A Terrible World, What A Beautiful World' found its final form, a distillation of the best things about this remarkable band. A new way of working led to a renewed excitement about the next chapter for The Decemberists. "I've never lived with a record for so long," says Colin Meloy, "documenting my shifts and changes as a songwriter, with a real sense of time passing. And there's something very freeing about working on music with absolutely no agenda, and just letting the songs become themselves."
description fro www.roughtrade.com