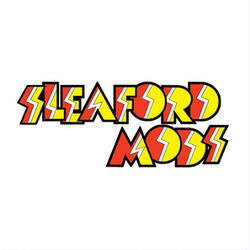 Spitting punk pile into the earholes of anyone who will listen.»

It's been an utterly insane year for Sleaford Mods. Once dismissed around their native Nottingham as "two skip rats with a laptop", their last two albums, 'Austerity Dogs' in 2013 and this year's 'Divide And Exit', both on Harbinger Sound, have achieved the kind of critical acclaim that less inspired bands could only dream of. Equally, their live gigs have become rapid-fire, explosive, cathartic performances, drawing in endless sold-out crowds of people blown away to finally witness something that matters and actually has something to say. Now heralds the arrival of some highly-anticipated new music from front gob Jason Williamson and music master Andrew Fearn in the shape of the 'Tiswas EP'. Released through Invada Records (the Bristol label responsible for Beak>, Drokk and numerous soundtracks including Drive / OldBoy), the 'Tiswas EP' features four brand new studio tracks alongside 'Tiswas', lifted from the 'Divide And Exit' album. It is released on both yellow and orange Tiswas coloured vinyl (3000 units in total - 1500 of each variant), and sees Sleaford Mods pushing and developing their bile and style.
description from www.roughtrade.com