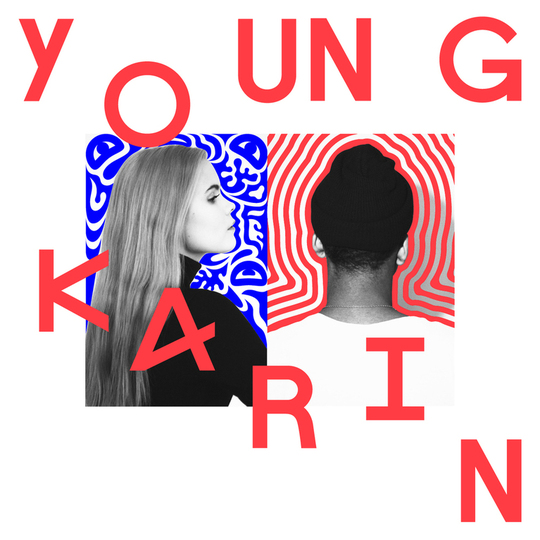 It’s sometimes a wonder that there’s room for fresh partnerships in Iceland’s compact but prolific music scene, but Young Karin represent just that - they formed in the winter of 2013 after Logi Pedro Stefánsson - who committed Icelandophiles may recognise as one eighth of dance pop act Retro Stefson - met the band’s titular singer Karin Sveinsdóttir at a song contest. After a short stint under the name Highlands (nixed due to a pre-existing band with the same name), they now go under their current moniker and are ready to release their debut EP no.1 into the wider world.

‘Berlin’ kicks proceedings off strongly, with the city providing the backdrop for the story of a summer romance that has gone cold as winter draws in - distorted bass and hip-hop influenced beats give way to icy-cold synths, which swirl around the wistful chorus “I still think of that summer/when the sun shined bright and we were in love/now it’s cold outside/Berlin in wintertime.” ‘Hearts’ raises the bar further, running a glitched-up vocal sample across a chilled, minimal backdrop while Karin sings of guilt and loneliness - conflicted between hiding her feelings after a one night stand (“I hope they’ll never, never know/how low our hearts can go.”), and a desire for companionship (“I hate sleeping alone/I’m scared when no-one’s round.”). It’s a perfectly-formed slice of bittersweet pop, and the best indication here that Young Karin could be a significant addition to Scandinavia’s pop lineage.

The EP’s ideas aren’t always so fully realised though. ‘Rolling Stones’ is a good hook - “too young, too free, too curious,” - in search of a slightly less disjointed song, with the mixture of trap elements and Crystal Castles synths not gelling quite as well as they could. And at only just over two minutes long, ‘Stop Signs’ feels like more of a sketch than a full-blown song, ending just as it feels like it’s building towards something - a shame, since the theme of an obsessive ex could be interesting if it was more fleshed out. ‘Sirens’ ends proceedings on a high, however - it’s excellently produced, allowing Karin’s voice room to breathe where necessary and filling in the gaps with punchy synth breaks. Thematically, it’s also rock solid - Karin is despondent without being maudlin, her voice matching the tempo of the song while still having the right tone to depict a deteriorating relationship (“we used to ride, now we barely go out/we were so fly, who you hanging with now?”).

As a bonus of sorts, there’s also a remix of ’Sirens’ by Icelandic experimental stalwarts múm. While its existence feels like a fine indicator that the Icelandic music scene is as self-supporting and tightly knit as you might expect from such a sparsely populated country, the remix itself seems less impressive than that fact. It’s appropriately glitchy, given its creators, and is a lot less tightly wound than its source material, with drum patterns and synth bleeps skittering off in different directions. All of this can make the track seem overly fragmented - ironically, it might have benefitted from not being presented directly after the original.

Overall, no.1 feels like a series of musical experiments, with the duo taking the opportunity to push in different directions and discover what works. It’s definitely more hit than miss, and there are solid foundations here for the group to build on - indeed, if this session version of Poliça-esque non-EP track ‘Call On Me’ is anything to go by, they’re already evolving. For now though, no.1 should be taken as a promising first step for Young Karin.