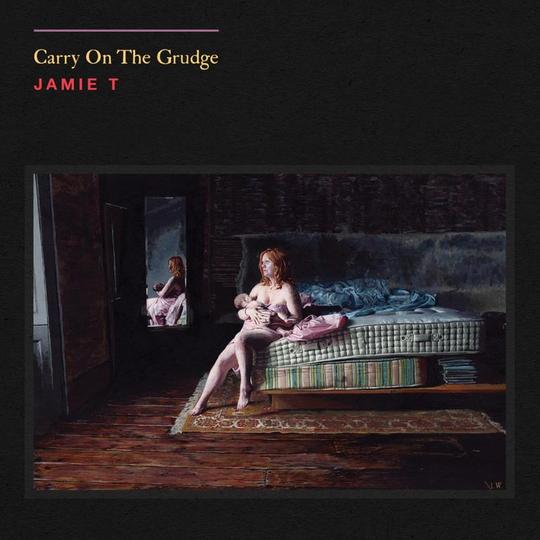 There is a void in everyone's lives. One you don't realise exists until you're a few decades old. It rears its ugly head in the peculiar years between adolescence and adulthood. It's a hollow feeling. One built upon nothingness. No direction. Nothing to do. Nowhere to go.

Jamie T knows this feeling all too well. With Carry On the Grudge, his third record, he sets out to prove it. For many years he was the missing man of a much-mocked generation of musicians. But now he's back, and time he's armed with much more than just a knackered old bass guitar.

'Limits Lie' kicks things off with a smile, albeit one coated in tears. The track brings the heavy beat to the party, adding that extra edge to a tale of sweet melancholy. The song is the sound of someone finally realising there's more to life than a perpetual Friday night, but not really knowing what 'more' is just yet.

This theme continues throughout. It's similar to the renaissance The Maccabees enjoyed with Given to the Wild. In fact, at times Jamie T seems to be channelling Orlando and co. 'Don't You Find' has that sullen expansive nature that those Brighton lads love so. It's all creepy and crawly in the verses while exploding with considered restraint at the chorus. It's a far cry from 'If You Got the Money', that's for sure.

At times the album reverts back to that Camden-tinged nightmare that Pete Doherty has been swimming around in since he jumped off the reformation wagon. 'Zombie' and 'Rabbit Hole' take us on a trip back to a time when Freshly Squeezed on Channel 4 was ran by the radio presenters of the future and V Festival had a few decent headliners. It was a simpler time.

But this slight slip into the past doesn't hinder the record; in fact it strengthens it, fitting the overarching narrative perfectly. Carry On the Grudge is a record about finding direction after the party, and what's more true to life that regressing every now and then.

The back end of the album is where the young scallywag really flourishes. 'Love is Only a Heartbreak Away' is the type of song the Arctic Monkeys should be writing. Yes it's basically all of Turner's Submarine soundtrack mushed up into a ball, but who cares. It's heartfelt and acoustic and stuff. When an acoustic track works, it just works, okay.

The big finale 'They Told Me it Rained' shatters the lad dream into smithereens. Leaving nothing but this void, there's no chance of reclaiming the past, no matter how hard he tries. The days of Red Stripe and ska guitar are long gone. The track swoops and sways like nobody's business, tugging on heartstrings with aching keyboard tones. It's the sound of a boy becoming a man, one tear at a time.

Carry On the Grudge manoeuvres around post-adolescence with expertise. The void might exist, but at least now Jamie T is back there's someone to share the pain with.