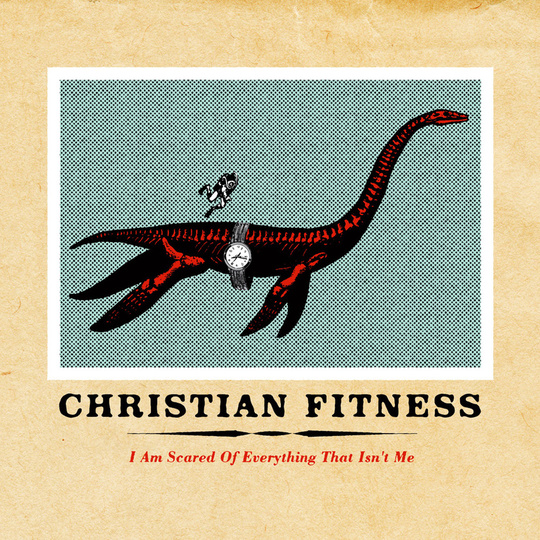 One benefit of me likely being older than you is that I grew up in The Age Of The EP. With little to no internet and often a few years between records, bands had to use EPs to stay connected with their fans, earn a few quid and test out new ideas. Nowadays, we have Soundcloud, Pledge music, Twitter etc fulfilling this service but I don't think it is a coincidence that most of my favourite ever acts right now have had such a surplus of material that their output in between LPs has been almost as formidable as the finished records themselves.

Falco (he of Mclusky / Future of the Left fame) is one such musician. There are a couple of decent albums in the songs deemed unworthy of making the cut and Christian Fitness finds him putting out some of these unsuitable side thoughts as a solo album.

I could well be wrong, but I don't think it's a coincidence that opener 'Agdevicesnew, anon' deliberately hides the vocals under such an extreme layer of murkiness that they're totally unintelligible. It's a bold statement of intent that this isn't a record of his usual ilk, where quotable lyrics - which tend to typically be inescapable on a Falco LP; and indeed a review of one - aren't the primary focus.

The witty vocals are audible again by track two (in fact 'Soft power itches' has one of the most hummable and quotable choruses here) but this sense of playfulness continues throughout [Note: the song title 'Attack of the 50 foot side project' also provides a big clue]. There are dysfunctional chords a plenty, songs far more harmonious and bare than FOTL might normally make ('Carthage must be destroyed' / 'Say hello to nobody') and huge layered climaxes that ring around your head long after they're over ('The Earth keeps its secrets' / 'Disturbing the ache').

The title track is a scathing attack on small minded people who live in fear of immigration disguised as a melodic pop song. I've listened to 'Christian Fitness' more than anything else this year, partly because of its trademark lyrical hook, largely because of the colossal ending that melds the scene stealing intro and repetitive refrain into one joyous whole. And I'm keen to draw attention to 'Feel good hit of the second trimester' for no more greater reason than having my favourite title in some time.

The sense of wanton abandon is part of the inherent joy of this debut solo record; a spontaneous glimpse into what one of Britain's finest musicians would make when left to his own devices. It is not polished nor laboured (and sounds for the most part like it was recorded in one take within a bomb shelter) but - like those EPs of old - feels just as important, enjoyable and rewarding a piece of the overall journey.