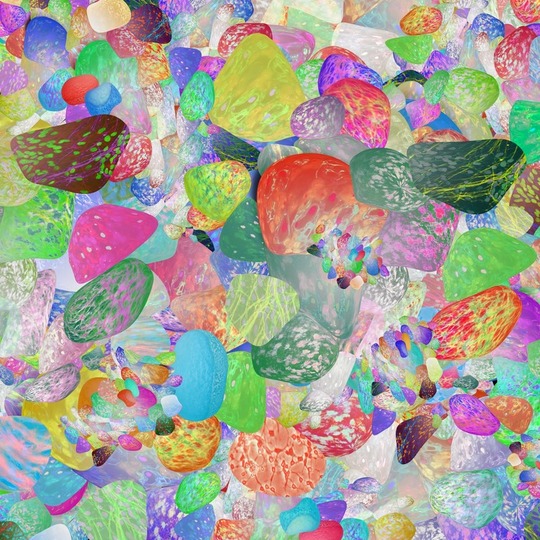 After last year’s Glynnaestra, a record that blended experimental collages of sound with elements of classic psychedelic pop, Grumbling Fur (the duo of Æthenor/Guapo/Mothlite/Ulver man Daniel O’Sullivan and prolific solo artist Alexander Tucker) seemingly didn’t think much to the idea of pausing for breath. Preternaturals, which is being released by our esteemed friends at The Quietus (who named Glynnaestra their favourite record of 2013), very much continues where that record finished off which, given the strengths of the album, is hardly a bad thing.

Listeners are greeted, then, with a brief intro, the Genesis P-Orridge referencing ‘Neil Megson Fanclub’, before ‘All the Rays’ bursts with an appropriately sunny disposition through the curtains. Foregrounding the distinctive, slightly off-kilter, dual vocals of O’Sullivan and Tucker, to describe Preternaturals’s first track proper as merely catchy would be doing its composers a disservice. That it starts with a chorus line almost as jauntily memorable as the one which, in a just world, would have made Glynnaestra’s ‘The Ballad of Roy Batty’ a #1 hit last year, certainly helps. Grumbling Fur have always had a knack for writing songs that subtly reel one in, but there’s less subtlety than usual here. The clever arrangement (the presence of which almost goes without saying when you’re talking about these two) is backing up the hooks, which take centre stage, rather than the other way around.

This is a trend that continues as the album progresses, albeit one that becomes less prominent as the album continues. The Tim Burgess featuring ‘Lightsinisters’, the highlight of the first half, shuffles along in glistening contentment at its own, almost effortless, accessibility before the pastoral ‘Feet of Clay’ rolls playfully through the grass. A brief interlude precedes two more self-assured performances in ‘Secrets of the Earth’ and ‘Mister Skeleton’. All these tracks front up to Grumbling Fur’s newfound confidence in songwriting by focusing on the duo’s melodicism, rather than on the otherworldly drones and scarcely identifiable sounds that still make up a large part of the music on offer. Such an approach certainly works too; if you’re looking for hazy tunes to soundtrack the red sunsets of the fading summer than they are here, ready and waiting.

What the brief interlude tracks - the aforementioned ‘Neil Megson Fanclub’, ‘White China Pencil’ and penultimate piece ‘Materials Recording the Fibres of Time’ - all hint at, however, is the album’s closing treat. With ‘Materials…’ having provided the briefest snatch of genuine beauty Preternaturals has yet revealed, closer ‘Pluriforms’ arrives right on cue. A clanking, quasi-industrial, detour from the sunny climbs that have dominated Preternaturals to that point, ‘Pluriforms’ might be both the darkest and yet most alluring track Grumbling Fur have prepared to date. It hints at new directions for O’Sullivan and Tucker’s collaborations, whilst also recalling the rather more brooding atmosphere of debut album Furrier or that of Glynnaestra’s closer, ‘His Moody Face’.

If Glynnaestra was about Grumbling Fur becoming more comfortable with the idea of producing genuine pop in a surrealist context, then perhaps Preternaturals is the sound of Grumbling Fur squeezing surrealism out of a pop context. It’s a philosophy that has paid dividends for certain, but there’s definitely room on the album for the slightly more shadowy side of Grumbling Fur to assert itself a little more. Whilst the exposure of O’Sullivan and Tucker’s pop heart has been more than welcome, one senses that there are many more sides to this complex, stubbornly esoteric collaboration that are yet to be revealed, and that’s an exciting thought indeed.