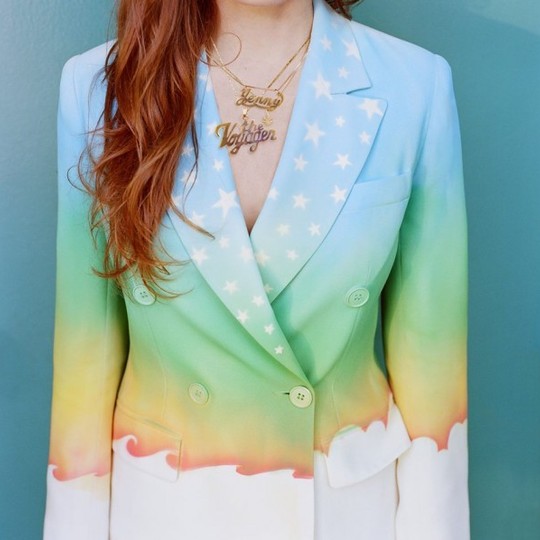 There’s something endearing about a pop artist who’s a dyed-in-the-wool space cadet. I’m not talking about the manicured crazy of, for example, a Katy Perry or Niki Minaj, who have pretty much perfected the art of mainlining ADHD into prepubescent girls with their hectic repertoires of cartoon poses. More the old-fashioned, small town acid-trip eccentricity of your Bush, Bowie or Black (Francis) – imaginative fruit loops with an intelligence shot through their sound.

Jenny Lewis has long had an absurdist streak bundled up in her country-tinged confessionals, but the mix she serves up on The Voyager, her third long player, is particularly fascinating. To place her in the same league as the latter names above would be premature, but The Voyager sees her carve out fresh territory in search of a glossier, bolder sound. It’s top-loaded with big, utterly charming pop songs that maintain the attitude, honesty and lyrical dexterity she corners so well. And, unless I missed the subtext of ‘Starships’, Nicki Minaj never penned a soul-searching meditation on the Voyager spacecraft…

The thing that Lewis does so appealingly here is to pivot between the high-def everyday and the vaguely cosmic, all the time keeping a knowing smile on her face. That tightrope between playfulness and unflinching honesty is a truly wonderful thing, preventing her from either a) going up her own arse or b) becoming a parody of herself. She pirouettes along it effortlessly.

Lead single ‘One of the Guys’ has snared attention with its unapologetically naff, Hollywood-stars-do-gender-bending video, but is lovely enough to stand up on repeated listens. It’s one of the more saccharine points on the album (which is saying quite a lot), but also sets out stall for some of the central themes Lewis sings about – namely the choppy waters between an open mind and the ticking timebomb of maternal instinct. “I’m just another/Lady without a baby” she insists, and the deadpan delivery makes a potential trite line a wincing insight. Imagine someone like Adele singing that; it would just fall flat. And, on occasion, it sadly does. ‘Head Underwater’ and ‘Love U Forever’ are notable misfires, drowning under their own weight. Lewis has claimed this is the most personal record she’s made, and the directness of her lyrics attest to this. But many will find it overwhelmingly cheesy compared with her previous two outings. If you don’t mind that, though, you might well find yourself falling in love with the emotional candour of the record as a whole.

‘She’s Not Me’ is a hugely ambitious tune which also sums up this marmite-worthy love/hate thing; dripping in Eighties drivetime atmosphere and a gorgeous strings accompaniment, it’s hugely ambitious. Everything is in widescreen, from the regimented pound of the drums to the blues-soaked guitar licks. But, again, it’s unapologetically twee, simultaneously a massive step forward and a gross reduction of Lewis’s writing talent. Exhibit A: "When I told you I cheated/And you punched through the dry wall"; suddenly it all becomes a bit of a guilty pleasure.

Elsewhere, however, The Voyager offers up some of the best tunes Lewis has ever written. ‘Slippery Slopes’ is a pop rock chugger that swings on a killer chorus, while ‘You Can’t Outrun ‘Em’ is a slice of Americana that nods to Fleetwood Mac and road movie soundtracks with its crashing chords and soaring harmonies.

‘Aloha & the Three Johns’ is another high point, chronicling what sounds like the most emotionally unstable holiday ever with a wide-eyed humour that’s made all the more irresistible by Lewis’s exquisite vocal take. ‘And John’s been avidly reading Slash’s bio/ There was a TV set smashed out in front of his room’ she sings with a hint of disgust.

That voice also gets the proper showcase it deserves, and in a wonderfully understated fashion. When it climbs to the higher register its breathy intensity is stunning – just see title track ‘The Voyager’. Like ‘She’s Not Me’, it recklessly veers between the sublime and the fromage, but unquestionably wins out. Finally, special mention has to go to country-inflected Paris confessional ‘Late Bloomer’, a song as sexy and brave as the menage a trois it depicts. If you don’t get shivers during the ecstatic bridge, please check your pulse.

All together, The Voyager’s balance of frothiness and fearless introspection make it something pretty special. It’s fun, compulsive listening, and really highlights Jenny Lewis’s songwriting credentials with a clutch of great, unpretentious pop songs. Some will undoubtedly find the high dose of kitsch a major irritant, but for apple pie Americana laced with star-gazing self awareness, Lewis is truly peerless.