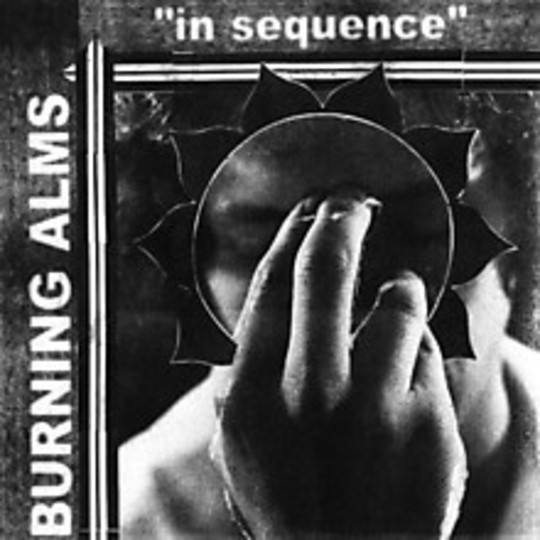 Remember Distophia and Calories? You should do. The former's 'Joanne' 7-inch is one of the great 45s of the 21st century while the latter - effectively a continuation of Distophia under a new moniker - put out a string of underrated records, 2009's debut long player Basic Nature arguably the pick of the bunch.

For those of you that do remember and wonder what they're up to now, don't go away. For John Biggs (noise maker and mouthpiece) and Tom Whitfield (rhythm section) are back. And how. Forget the dull two-pieces in thrall to The White Stripes, The Black Keys et al. This duo sit firmly to the left of any pre-conceived axis. Think bands like No Age, Japandroids or Kent newcomers Slaves and you're on the right track. Ladies and gentlemen, I give you Burning Alms.

Despite only forming two years ago in their native Birmingham, the lineage Biggs and Whitfield carry from over a decade of playing together in various bands pays dividends here. Sure, parts of In Sequence sound like they may have been recorded in a toilet or worse, but this is music with integrity, from the heart, from the soul, and with intent. Not content with only taking one genre and lacerating its insides out. Burning Alms play a game of mix'n'match here that works throughout its 16 pieces.

'Sixteen pieces?' I hear you shudder. Well yeah, In Sequence is basically Burning Alms' entire songbook and more burned to one tape. But fear ye not, as this collection is anything but an exercise in endurance. Instead, it feels like being a fly on the wall during an experiment in a music laboratory. While the band describe themselves as an avant-garde noise act, there's parts of In Sequence that yearn with the fragility of a lo-fi Conor Oberst or Frank Turner before stadiums beckoned. Listen to the effluent 'River Sea Originates' without shedding a tear if you dare. Likewise 'The Periphery', whose "There's no culture!" refrain over a careful orchestrated acoustic melody makes it a 'Wonderwall' for the disaffected of this generation.

It's when the noise levels reach maximum that Burning Alms really soar, though. Early couplet 'The Aperture Colonised' and 'So Unreal' tear the roof off literally while providing twisted examples of sonic assault. The latter, based on the life of William Burroughs novelist son Billy, being a shining example of Burning Alms literary as well as aural fascinations.

Elsewhere, 'Mid Storm/Still Ending' could be the best Dinosaur Jr song J Mascis hasn't written while the short sharp shock of 'Forest Clearing' recalls fellow early Noughties slacker punks Jetplane Landing. When Burning Alms do toy with elongation such as on 'Night Climates', which clocks in at ten seconds under eight minutes, they emanate enough suspense and drama to make time fly. Switching effortlessly from the hazy introduction segment that's not a million miles away from the one which opens 'The End' by The Doors, to the unexpected abstract jazz diversion around the four-and-a-half minutes mark.

It's the Hemingway-referencing 'Matadors' though that marries all of Burning Alms' components in one glorious hail of cacophonous feedback and achingly brutal melody. Echoes of Jane's Addiction and Tool reverberate through Biggs' insistent riffing with the whole song threatening to abandon ship altogether around its mid-point, teasingly grinding to a halt only to start again at full pelt seconds later.

What makes In Sequence more enticing - while sticking two fingers up to those mourning the supposed death of the LP - is that it demands to be heard as stated on the front cover; in sequence. Bookended by two noise segments ('( )' and '(Birds) In Sequence' respectively), it feels like the first chapter of an encyclopaedia into its creators' inquisitive minds. Long may it continue for the rest of the series.