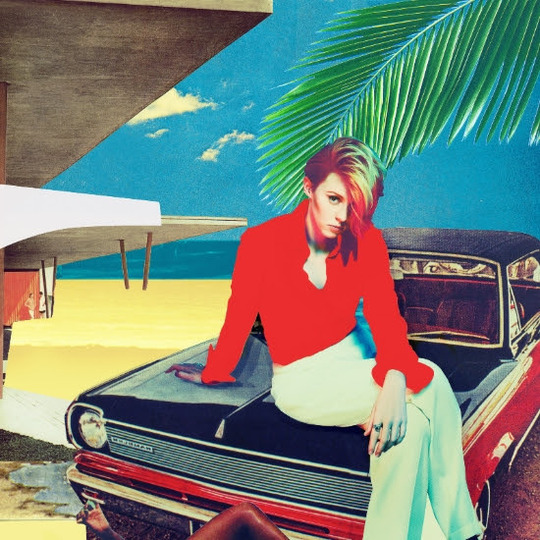 Seasoned veterans of Final Fantasy VII tend to think of Costa del Sol as something very different to those who've wound up there on a package holiday. Shortly after escaping a claustrophobic city and certain death, your not-so-merry band of adventurers happen upon a colourful port town) that serves as little more than the calm before an unrelenting storm. Drenched in sun and summer rhythm, FFVII's isolated paradise serves as a brief escape, not the kind of place that could house a compelling long-form narrative.

Elly Jackson is unlikely to agree, given that her return to the fray centres around a tribute to a tropical island she's been visiting since childhood. As such, the first La Roux album in five years embraces a playful electro-calypso theme in a vice-like grip. Trouble In Paradise isn't all that concerned with making some grandiose comeback statement - though the storming, Duran Duran-esque 'Uptight Downtown' takes care of that early doors - not when there's so much shimmer to play with. It's a bold move; emerging from hiatus in relatively nonchalant fashion. In many respects, this is the most important step of Jackson's career. La Roux sold millions and bagged a Grammy, neither of which were in the script. Perhaps it was all too much too young, hence the retreat.

Now the proverbial older and wiser, Jackson is still calling her own shots, but in a more assertive way. She's always been front and centre, to the point that many mistakenly (though understandably) regard La Roux as a solo project. The recent, sudden departure of co-founder Ben Langmaid effectively realises that viewpoint. There's still a band and Langmaid - whose exit wasn't entirely amicable - gets credit on the lion's share of the tracks. He might get a little more than that, too, if the "You're not my partner, no you're not a part of me, all I need is silence" shout-out of engaging mini-epic 'Silent Partner' rings as true as it reads. This is Jackson's baby now, and so we march to the beat of her drum through idyllic vistas and plaintive reflection.

Though pleasing on the ear, the initial expanse proves quite shallow. The aforementioned 'Uptight Downtown' is a charm offensive, one that masks a lack of depth by hurling a kitchen sink full of razor-sharp hooks at the listener. 'Kiss and Not Tell' and 'Paradise Is You' are less dazzling and thus more transparent, the latter guilty of dramatically slowing momentum. There's absolutely nothing wrong with writing surface-level pop, but it has to be as close to flawless as you can get. Take the likes of 'Biology' or 'The Promise'. As with every single Girls Aloud song, there's no room for subtext, but the music is so perfectly-arranged and presented that it doesn't matter. Here, Jackson's attempts at mixing carefree sauntering with emotive bursts leads to a 'win some, lose some' situation.

On the victory front, Trouble In Paradise features Jackson's greatest yet. 'Let Me Down Gently' is that moment in a musician's career when potential is wonderfully realised. It's the kind of song that someone who took a five-year breather and collected themselves should write, but often doesn't. It's a masterclass, a painful confessional and a goosebump-summoning anthem all at once. Dropping her guard fully after so much careful shielding, Jackson reveals scars, punishing herself while pleading with another.

Her pain is a pulse, the soundtrack a constant rise to the point that it becomes an anthem, an amazing 'fuck you' to whoever inspired it, regardless of how much power she's giving away with her words. Everything connects, right down to the most welcome saxophone flourish since 'Midnight City'. One hates to sound hyperbolic, but 2014 is unlikely to serve up a more complete pop song. Yet this is a record that also devotes just as much time to tongue-in-cheek humour. Though the horribly-named 'Sexotheque' and the oh-wait-this-might-be-worse 'Tropical Chancer' have their moments, both are weighed down from the get-go, their groan-inducing titles feeding into lyrics that Jackson, game as she may be, can't pull off.

La Roux returns on its own terms, with at least five minutes and 40 seconds that capture tremendous artistic growth and expression. Let's hope for stormier weather next time.