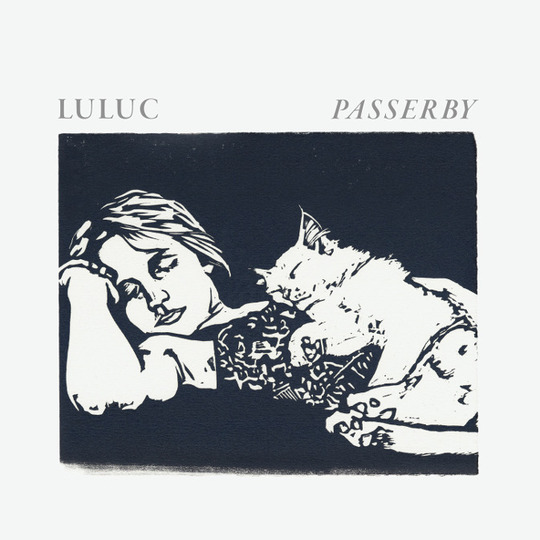 I first stumbled across Luluc when they were given a last-minute slot at The National’s ATP event in 2012 - at the time, the duo provided some welcome respite from Kronos Quartet’s more avant-garde moments, and there was mention of a forthcoming record being produced by The National’s Aaron Dessner. A year-and-a-half after that performance, Passerby has finally surfaced. Indeed, based on their history, Zoë Randell and Steve Hassett aren’t exactly prone to rushing things - their debut record Dear Hamlyn (a poignant dedication to Randell’s father) was released all the way back in 2008, so it’s taken six years for all the pieces to fall into place for a follow-up.

At their core, Luluc are a folk duo based around a gentle acoustic guitar and two wonderfully harmonious voices, but it feels like Dessner’s input has allowed them to subtly expand the range of sounds used for Passerby. With its pattering beat and gentle bass hum, ‘Without A Face’ almost feels like it has a song by The National playing somewhere in the distance, while ‘Early Night’ is another song where Dessner’s influence is particularly pronounced - its after-dark atmosphere provides a distinct contrast to the folkier sounds on the rest of the album. Nothing ever obscures the duo’s biggest asset, however - their effortless, striking harmonies, which are proof that the softest voices can be the most powerful.

Randall’s lyrics often have a peaceful, observational feel to them - whether describing the spectacular view from a night flight on ‘Small Window’, or painting a picture of the changing seasons in ‘Winter Is Passing’ and ‘Gold On The Leaves’. But at its core, Passerby is an album about emotions - and sadness is foremost among them. ‘Tangled Heart’ reflects on that oldest of muses, the lost love - meandering through vignettes about disinterested encounters with strangers in bars, sleepless nights, drinking to forget and then finally, as the song’s brassy backdrop reaches its crescendo, a weary admission that the lover in question is still playing on her mind. ‘Senja’ continues that theme with its aching chorus lyric “where does this longing come from/or is it just how it runs?” and ‘Reverie On Norfolk Street’ completes a trilogy of lovelorn songs. By Luluc’s standards, the music is relatively jaunty (and strangely reminiscent of The National’s ‘Pink Rabbits’), but the wistful lyrics tell a different story, as the hustle and bustle of everyday life can’t drown out thoughts of a past romance.

Another type of loss also informs the album’s lyrics. The title track sees Randall reminiscing about childhood friends (both human and animal), while ‘Gold On the Leaves’ sees her pining for the heat of her Australian homeland - with the subject matter both songs inevitably leading to thoughts of her father. It’s closing track ‘Star’ that is the most poignant dedication, however, with its quietly heart-wrenching climax seeing Randall gazing at the night sky, teary-eyed, as she makes her peace with her father’s passing - “I search but I’m not lost/I cry but it’s not wrong/and I can see so much/much more than before.” It might occasionally makes for heavy listening, but Passerby skilfully turns quiet melancholy and dignified sadness into a thing of subtle beauty.