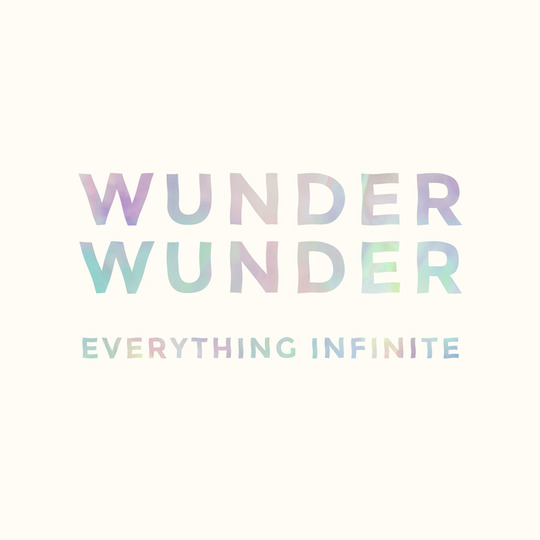 Wunder Wunder’s debut LP Everything Infinite has arrived just in time for summer. As we revel in the festival season, enter the final third of the World Cup and break open the Pimm's, the sun is finally sharing her bathing glow with the rest of us; there is a lot to celebrate and a lot of music to celebrate it to. These Aussie natives quench our thirst for summer loving with their glistening debut, which exudes that first refreshing taste of ice cream, the comforting feeling of damp sand between your toes and the sight of blazing horizons speckled with palm trees – a proper summer album.

The band, made up of Melbourne producers Aaron Shanahan and Benjamin Plant, was conceived in the Australian psych scene that bore Tame Impala and Jaguar Ma, propelling the apparent obsession the world currently has, and has had for some time, with psych. Now living in Los Angeles the duo have distanced themselves from the ‘indietronica’ past of their Miami Horror project for more psychoactive pastures, using their new dwellings to create an album that imagines an idyllic L.A landscape full of bikini-clad roller-skaters, palm trees, pastel sunsets, Hollywood hills and a haze of surrealist abandon.

You could argue, with some conviction, that psych is an overpopulated and oversubscribed genre. There’s more kaleidoscopic reverb floating around than you can shake a stick at these days, pandering to a Sixties nostalgia that just won’t go away. Does Everything Infinite offer anything new? A resounding no, but it is difficult not to wish to be enveloped by its tie dyed bosom. The record drips with colour, hooks, and thoughtfulness, with songs circling themes of childhood nostalgia, dreams and universal connection, but there is that overriding sense that this all comes a little too late. A line needs to be drawn in the sand. We can’t go on like this forever.

It is this very fact that makes Everything Infinite so bittersweet; there are some impressive moments and on the whole is doesn’t fail on its delivery, but there is nothing here that hasn’t already been done by, say, MGMT, Tame Impala, Temples or any other of the countless psychedelic space cadets around at the moment. Well that’s not strictly true, their background as electronic producers does give them somewhat of a richer and slightly more discerning tapestry, but as to whether they truly offer anything of real interest? I’m not wholly convinced.

The album’s sound manifests itself via three main sonic focusses: the warm soak of washed vintage synthesizers, the deep fuzz of psych guitars and layer upon layer of harmony; a concoction of Sixties, Seventies and Nineties pop. The title track opens with rumbling guitars, swirling keys, high pitch yelps and the song’s hook ”Everything infinite is what we are” - references here to that old Sixties chestnut of “we’re all connected by the universe man – pass me the joint” are a little too obvious. ‘Coastline’ offers the record’s most poignant of track with its sun-soaked synthscapes and driving-in-a-top-down-Cadillac-along-an-American-highway feel; the vapour of childhood memories. The album’s big pop track comes in the shape of ‘Hail the Madman', while ‘Trouble In Utopia’ provides the most outlandish part of the album's fabric, moulding house danceability in its beginning and abstract psychedelia throughout its midsection.

The resurgence in psychedelia, until fairly recently, was extremely refreshing. There’s something progressive in wanting to explore the far reaches of sound, but unlike prog-rock, it’s not a pretentious. Now, however, it is increasingly difficult to separate the copy cats from the definite article. Everything Infinite is perfect for summer, it has a few beautiful tracks and is constructed masterfully, but you can almost hear the fan chatter describing the outfit as 'that band who sound like Tame Impala'. Separate it from the current landscape and it is awash with intrigue and interest, but steeped in it, as the case unfortunately is, and it is just another psych record. A bittersweet symphony, that’s life.