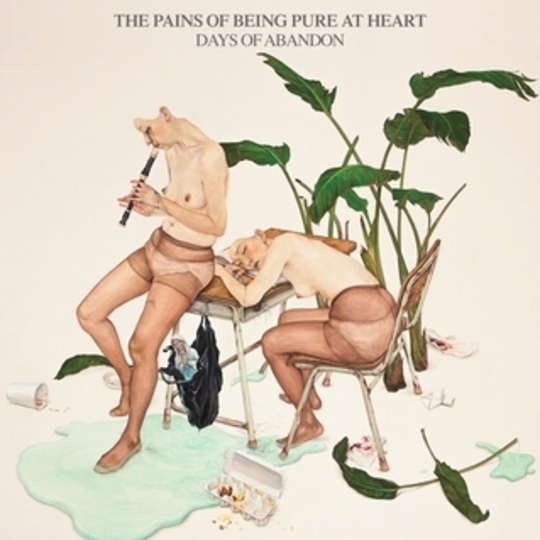 Five years is an awful long time in the world of music, as The Pains Of Being Pure At Heart can ably demonstrate. From their humble beginnings culminating in 2009's self-title debut through to 2011's Smashing Pumpkins indebted follow-up Belong, the metamorphic transformation undertaken to get to long-awaited third album Days Of Abandon symbolizing a new found maturity among other things.

Whereas both its predecessors put a heavy emphasis on distortion and feedback, Days of Abandon lets the songs breathe and ultimately speak for themselves. Gone are most of the original band members and as a result so are the older style of arrangements. Instead, the ten pieces display an emotional fragility and insecurity that proves quite endearing.

Now essentially a vehicle for songwriter Kip Berman (although long-time drummer Kurt Feldman also remains), Days Of Abandon finds itself steeped in reference points borrowed from the Eighties. Fuelled by Berman's propensity for detailed storytelling of a sweet and sour nature, it manages to sound like neither of its predecessors while still retaining an identity reserved exclusively for The Pains Of Being Pure At Heart.

For example, opener 'Art Smock' takes the form of a lovelorn lament. Stripped down to just Berman and an acoustic guitar, its creator baring his soul for all to see (and hear). While not entirely representative of the album as a whole, it sets the scene for what follows, with any suggestions of this being Belong part 2 quickly dispelled.

Recent single 'Simple and Sure' underlines Days of Abandon's pop sensibilities, its killer hook marrying insatiably with lyrics like "I'll never find anyone as absolutely right as I found you". Interestingly, the vocal contributions here from A Sunny Day In Glasgow's Jen Goma coincide with Days Of Abandon's best moments. Upbeat pop number 'Kelly' sounds like it could have been lifted off the soundtrack of The Breakfast Club, while the penultimate 'Life After Life' finds Goma's smooth tones comparable to those of Debbie Harry during Blondie's Parallel Lines heyday.

Elsewhere, 'Beautiful You' and 'Until the Sun Explodes' are the nearest Days Of Abandon comes to The Pains Of Being Pure At Heart of old. While the former revels in its jangly wistfulness, the latter adopts a heavier stance reminiscent of the Lazy-era MBVisms of the band's early singles. It's album standout 'Masokissed' that best sums up Berman and conspirators shapeshifting though, basking in a pensive naivety not a million miles away from Felt at their most poignant. 'Eurydice' also packs a hefty punch, Berman and Goma's cutesy vocal interplay providing a timely intervention.

Introspective closer 'The Asp At My Chest' features Beirut's Kelly Pratt on horns, which adds a grandiose flavour to what is otherwise another sentimental ballad. In some ways perhaps an odd choice to end the record, it still manages to encapsulate what Kip Berman is aiming to convey here. Arguably it's the most revealing album to wear The Pains Of Being Pure At Heart's name on its sleeve; Berman admitted as much in a recent interview with Stereogum; Days Of Abandon also represents its creators' most ambitious body of work to date.