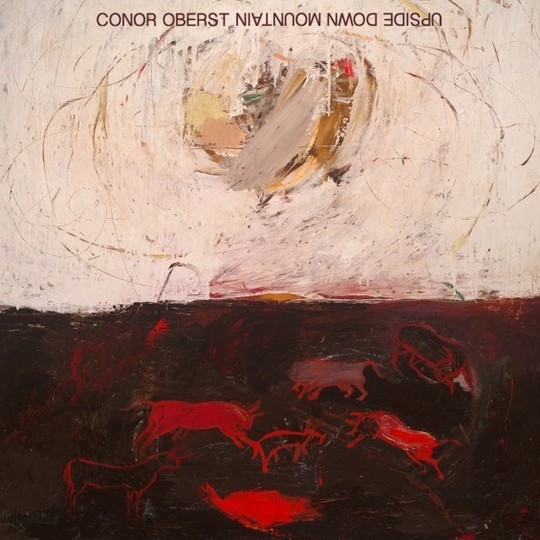 The last time I saw Conor Oberst play was in a packed-out venue in Paris’s Bastille neighbourhood early last year, just before he joined up with his recently reunited Desaparecidos outfit to tour the UK and Ireland. I missed those shows, but Paris went a long way towards making up for it. In a relaxed, playful mood, Oberst delivered a career-spanning set, also encompassing a couple of songs that would go on to feature on Upside Down Mountain. It’s to those songs’ credit that they slotted seamlessly into proceedings, and even more so that they have been rattling around my head since that evening.

Produced by Jonathan Wilson and featuring backing vocals from First Aid Kit, the new album is bathed in a Laurel Canyon glow, but it’s by no means a throwback. It comes on with a rootsy, sure-footed poise far removed from the dense electronics of Bright Eyes’ 2011 release The People’s Key , though the bigger difference here is the nature of the lyrics found within. While that album explored spirituality and the human condition via a kind of science fiction-drenched mysticism, Upside Down Mountain is built on simple, clear language and songs Oberst considers more intimate and personal. The essential themes remain the same, but they’re considered in a markedly different style here.

By its very nature, the record hearkens back to earlier works by the singer, and perhaps its closest analogue in his discography is 2005’s I’m Wide Awake, It’s Morning, for its pellucid songs, its intense focus on human connection. But where that album largely tried to make some sense out of turmoil, …Mountain, for the most part, is about leaving that turmoil behind. At the age of 34, with over 20 years of making music behind him, Oberst is a married man who, as he explained to Rolling Stone earlier in the year, doesn’t feel the ‘need to chase every ambition’ he harbours.

The gentle ‘Double Life’ spearheads this idea: augmented by a languorous wah-wah riff, the Söderberg sisters’ gorgeous harmonies and a woozy, tinkling piano, its narrator finds solace in staying in - away from the “spooks”, the cameras, the noise of everyday life. “I don’t remember getting here / But I’m glad I came”, he reflects, with weary conviction. The song’s bridge concerns crossing a figurative bridge, even, but Oberst sells it it with everything he’s got, and it works.

The album’s title derives from a notion he put out there on Lauren Laverne’s radio show recently, that ‘we’re all alone in our heads, on our own little mountaintops’, something that shades a song like ‘Lonely at the Top’ considerably (“It’s lonely at the top ...Of that upside down mountain”, concludes its first line). He notes how important language is to him in the press release, so it’s fitting that his lyrics here are as eloquent and thoughtful as they once were occasionally overwrought. The imagery threaded throughout is at once arresting and functions on multiple levels, but perhaps its greatest achievements arrive in the form of songs like ‘Double Life’ and, pertinently, ‘You Are Your Mother’s Child’. In perhaps the most nakedly sentimental thing he has written since ‘First Day of My Life’, he casts himself a contrite father addressing his son, and the result is… Well, it’s as schmaltzy as they come, but it’s sharp, funny and beautiful, too.

‘You Are Your Mother’s Child’ and parts of ‘Double Life’ and ‘Hundreds of Ways’ are written in the second person, a perspective Oberst returns to time and again here, notably in ‘Kick’, a deeply-felt ode to Kathleen Kennedy (daughter of Robert F. Kennedy, Jr.), ‘Enola Gay’ (not an OMD re-imagining) and the ranging, evocative ‘Desert Island Questionnaire’, a song which poses an increasingly absurd series of hypothetical (and not so hypothetical) situations before circling back to the concept of empathy and its ultimate importance.

Hypothetically: If I had to pick one adjective to describe Upside Down Mountain, ‘warm’ is the one I’d go for. That warmth is most immediately apparent in Wilson’s production and instrumentation; replete with rich, golden tones, its arrangements befit songs that easily rank among Oberst’s most welcoming. Melodies pour from the record, in flourishes of brass and pedal-steel that bring to mind artists from Paul Simon to Van Morrison; in the First Aid Kit sisters’ sterling contributions; and in his voice, which sounds as accomplished as it ever has. Perhaps his finest vocal performance is saved for ‘Common Knowledge’, a quietly devastating song which closes the album in contemplation of a life that simply didn’t work out.

Live versions of a few of these tunes have been floating around since that tour last year, and discussing ‘Night at Lake Unknown’ last summer, a friend of mine remarked that it sounded like an old, unearthed standard, dusted off and presented anew. That’s a pretty enormous compliment to pay an artist, but it’s one I readily agreed with. Oberst has his detractors - and admittedly, he’s hardly reinventing the wheel here - but at his best he’s capable of writing songs that do possess a kind of timeless quality, and ‘…Lake Unknown’ is in possession of it, no doubt. That it’s not even the best song on the album is another enormous compliment.

What Have We Become