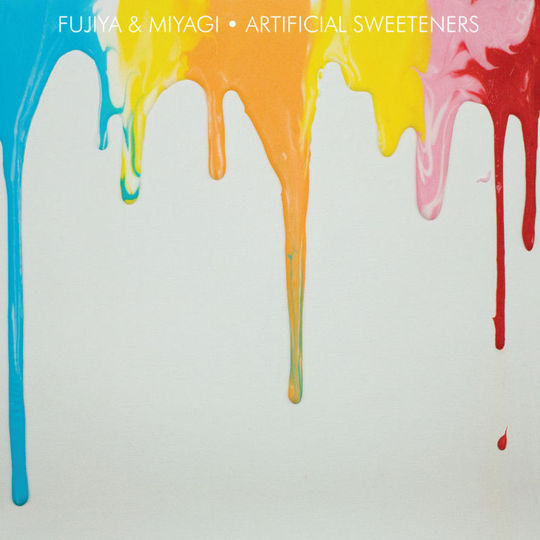 Not Japanese (they’re from Brighton) and not a duo (a trio at last count), Fujiya & Miyagi have spent the last decade (and a bit) carving their own little niche of motorik electro pop mischief. Whilst the have moved away from the more experimental work of their 2002 debut, their krautrock-indebted template of streamlined pulse-based electronic music has still maintained a spirit of genuine eccentricity as exhibited in the object fetishism of the title-track from 2006’s Transparent Things and ‘Dishwasher’ from 2008’s Lightbulbs.

Three years on from their last album, the solidly entertaining Ventriloquizzing, there has been only a small scale transformation in F&M’s sound. In fact Artificial Sweeteners sounds like an album they could have made at just about any point in their career. The bpm rarely drops below 120 and pulsating synths and driving bass set the tempo for beats that are generally four-on-the-floor; consistent with their PR description as a trio, there appears to be little trace of drummer Lee Adams, here replaced by crisp drum machine beats.

By dint of this, Artificial Sweeteners is arguably the record that most closely resembles the well acknowledged influence on F&M of Krautrock icons Can and Neu!, in so much that it is a record that is in constant metronomic motion, even by their own usual standards; there’s no time for the ponderous dark psychedelia of ‘Pills’ or the warm jazzy vibes of the aforementioned ‘Dishwasher’.

However, whilst loyal to the streamlined rhythms of their influences, here F&M add more colour and gloss than ever to their sound. Album opener and lead single ‘Flaws’ may be their sleekest, most dancefloor-ready release to date with the hi-tempo pulse of its layer precision synth arpeggios, taut punchy beats and nagging staccato guitar lick, not mention to the equally catchy repetitive vocal refrains “You were right and I was wrong” and “Everytime I argue with a fool, I always lose”. Lean and taut, but never quite mean, it suits them well. The instrumental ‘Rayleigh Scattering’ exudes a sense of gleaming retro-futuristic optimism that owes as much to Dare-era Human League as it does to the more obvious mechanistic propulsion of Kraftwerk’s Autobahn. Following it immediately is the not dissimilar title-track, distinguished by the brooding bassline, high sustain guitar lines and frothy off-kilter synth work, which combined with David West’s breathy man-possessed vocals, sounds like a sinister take on early Roxy Music.

Along with Can and Neu! these are pretty familiar touchstones for F&M by now and whilst not slavishly indebted to their forbears you can’t shrug off the feeling that they are a little too happy to rest on their collective laurels at this credible intersection between twenty-first century indie-electro-pop and mildly experimental art-rock gesturing. Only on a few occasions do their wilfully leftfield touches yield much effect, such as the dissonant screeches and industrial grind of ‘Vagaries of Fashion’ and the marriage of ethereal modulated organ and blocky techno jitters on ‘Tetrahydrofolic Acid’. These moments succeed a providing some much needed shade to a primary coloured record, something which David West’s permanently hushed dead-panned vocals fail to deliver.

However, perhaps Artificial Sweeteners' biggest flaw is that where Fujiya & Miyagi exhibit some textural or compositional adventurousness, it is always a slave to the monotonous rhythm. On the other hand ‘Little Stabs At Happines’, ‘Daggers’ and ‘Acid to My Alkaline’ are little more than catchy punk-funk-by-numbers a decade late. There’s a competent armoury of hooks and energy here, but neither this nor West’s repetitive and occasionally inane way with words engenders much emotion(albeit they don’t seem designed to). All in all it’s a competently executed album that keeps your feet tapping and head nodding for as long as it lasts, but one that takes too few risks and bares too little soul to linger in the listener’s thoughts and emotions once it’s over.