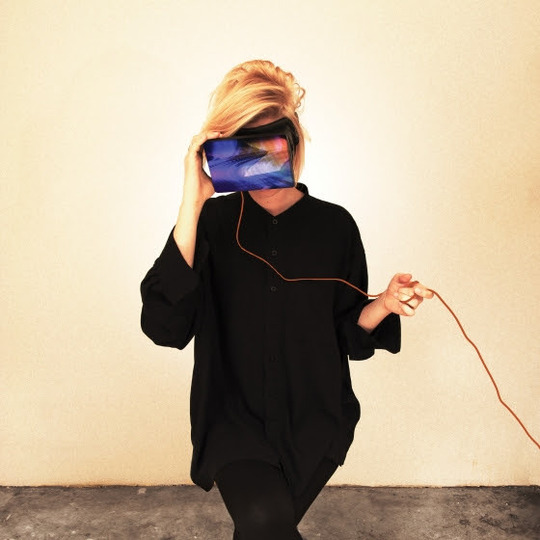 'Came outta nowhere' was the name of Erika M Anderson’s old website (now redirecting to TheFuturesVoid.net) and while it could have been a fragment of a number of stories drifting through EMA's soundworld (a drunk driver’s excuse… the loser in a barfight explaining his black-eye… an alien abductee waking in a ditch) the ironic redneck routine masked a real pride in making it out alive from a Red State, South Dakota, with all the guns and emptiness and bigotry that entails.

So, while Past-Life Martyred Saints was a rallying cry for anyone "small town and gay" or who’d "never seen the ocean / never been on a plane" it was wary of what might unite people: "I looked on the computer… all I saw was emptiness". The thesis of the follow-up is that what should have been the Global Village (trademarked, 1969; obsolete, 1999) is instead the ‘Interweb’ – the word she uses here that was once just a joke at old people’s expense but now names a Lovecraftian monster extending its tendrils through the screens of billions, prying into our dreams, and homogenizing our desires.

In a sense, PLMS had already answered the question: what’s wrong with a world where everyone gets to speak at the same time? As one long shout-out to friends and lovers and family, PLMS revealed why 99.999 per cent of wannabes lip-synching on YouTube won’t make it, and less than 0.0001 per cent will achieve a Warholian fame that hollows out what’s left of their soul: because if all they want is to be seen, to be affirmed as existing, the transaction demands that the watcher is rendered void; a zero to their one. The only reason people do get plucked up by the Great Descending Claw of Fame is that an awful lot of other people (the people infected when something goes viral) want to see them burn in the spotlight – to be reassured that the joke is on them; the artist is simply a clown, so it’s alright to remain passive spectators. Except s/he doesn’t have to be. The reason EMA filled me with more joy than any other artist of the decade was that she communicated her unashamed love and gratitude to all the people who made the lonely years bearable. They’re not the 'little people without whom…' in the sleevenotes, they’re the martyred saint of the title.

With its lullabies that sounded improvised (‘Breakfast’) and its lo-fi attempts at hiphop so far off the mark you had to be told that’s what they were (‘California’), PLMS was jawdroppingly intimate; the sound of the girl in the next trailer, singing along to a radio you couldn’t hear, indiscriminate about whether it’s punk or folk. It grabbed me like nothing since Sebadoh’s Bubble & Scrape (1993), or Cat Power’s Community (1996); with its collage of styles, and hooks that came from the intuitive layering of basic musical ideas (low on technique but high on attention to detail), it reproduced what it’s like to be stuck in the middle of nowhere, trying to imagine a wider world. It didn’t simulate perfection so as to climb to the top of the pile, but enacted the glorious mess of artistic experiments that is the pile. (Paradoxically, that’s the art that endures: not the kind that tries to transcend its time but that encompasses its time.)

Most of these ingredients are present and correct on The Future's Void, albeit with the rough edges sanded down. Production-wise, EMA has said she wanted the album to sound like Nine Inch Nails demos and - fair enough - this is what we hoped How to Destroy Angels would be, or what Zola Jesus might do next. That said, EMA draws on sci-fi visions of dystopia (hence names like ‘Neuromancer’, ‘Cthulhu’) rather than targeting Christianity, for a more astute criticism of the late-capitalist era.

First up, 'Satellites' replicates the structure of the previous album’s opener 'The Grey Ship' but instead of searching for identity in the deep history of migrants who confronted the prairie, it reminds us of a time when "the world was divided by a wall of concrete and a Curtain of Iron". If a quarter-century ago is “history”, and words that made sense in living memory already seem like symbolist poetry, we’re clearly living in an accelerated culture. So far so provocative, but the musical language used to say the same is a bit too safe; a compressed, radio-friendly remix of 'The Grey Ship'.

After that, ...Void manages to find its musical identity. ‘3Jane’, the third single, interpellates an imaginary listener more lost than any of the martyred saints but no less cared about; the music twinkles gorgeously like a cityscape at night; like the world outside the window when you tire of staring at screens. Beauty exists, the song suggests, but behind glass; far away, contained.

This, then, is the aesthetic of the album: drums clatter as before, guitars clang and scrape, synths blast white noise or saw-tooth waveforms impossible before computers… but all of this is contained, compressed, mixed down, and suborned to arrangements that define the music as a machine for delivering emotion. The raw, chaotic, noise-collages of her former band, Gowns, seem a long way away – but these elements are suspended to make humanity seem all the more precious. The music operates less as an end in itself and more as a counterpoint to the keening, whispering, screeching, gasping voice-as-expression-of-humanity: within the silicon maze, she suggests, there’s a ghost trying to get out.

And in a sense, it does. A crucial part of the EMA formula is the lullaby, nursery rhyme, or folksong updated (‘Cherylee’ on Red State, ‘Breakfast’ on PLMS); here, the echoes of playground chants in ‘When She Comes’ and ‘Dead Celebrity’ flatten any kind of musical hierarchy. They each look back to that first moment in childhood when we realize we can be creative – that music can be democratic – and they look forward to a moment in our collective history when all the icons that have so much power over us in 2014 are just material for children’s songs. Sure, the future's void but at least the past's present.