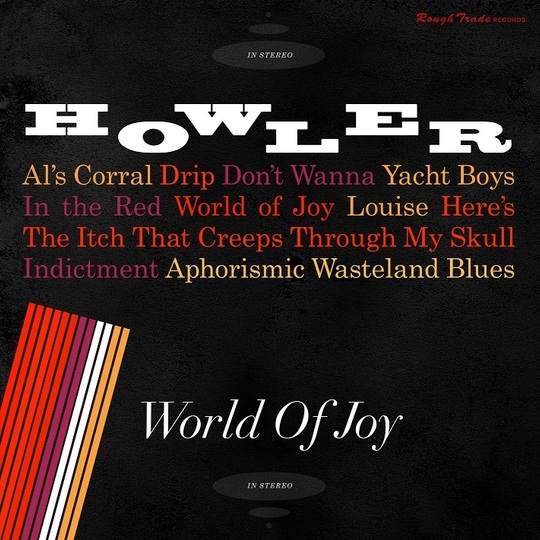 There’s a notable line in ‘Don’t Wanna’, World of Joy’s lead single: “You don't have to listen to The Smiths if you don't want to…” Is it a statement of non-conformist reassurance or a derision of Howler's (now very much defunct) labelmates? There’s also an open goal of an interpretation of this particular missive that will set purveyors of indie gossip off, given that Howler’s frontman Jordan Gatesmith has dated Johnny Marr’s daughter, Sonny, for some time.

But enough textual facetiousness about seminal Manchester bands and their loose associations to Midwestern garage outfits – let’s instead debate the thrills and spills of the Minneapolis four-piece’s latest effort, World of Joy, their not totally-dissimilar follow-up to 2011 debut America Give Up. The latter propelled Howler into the deceitful realm of hype specially reserved for buzz indie bands, but whilst exhaustive touring efforts and NME adoration earned them a respectable following, they never quite broke through to the other side.

So they returned to Minneapolis, recruited a new drummer (their previous sticksman was once said to be Prince’s son – a rumour he initially didn’t deny; potentially a fine PR move), and essentially built on their existing foundations. Recruiting local producer Chris Heidman (who’d helmed America Give Up) to man the sound booth once more appeared to indicate that if-it-ain’t-broke tactics would be in full effect. But with other bandmembers pitching in with songwriting – Gatesmith was an out-and-out bandleader and songwriter first time round – there’s evidently been some provision made for further creative outlets. This new method is perhaps responsible for World of Joy’s sunnier moments, such as swift opener ‘Al’s Corral’ - named after a blue-collar bar in their hometown – which gives an unusual shout-out to UFC, and the aforementioned ‘Don’t Wanna’, which sparkles with plentiful melodies and laidback reverb. Gatesmith’s throaty delivery takes prominence in such moments, showcasing its integral place within the band’s setup.

There’s a risk that comes with sticking to what’s familiar, however, as typified by the title track: it doesn’t so much offers joy as it half-heartedly drags, almost going through the motions as second album filler; Gatesmith adopting a whispery vocal that won’t convince anyone. ‘Yacht Boys’, meanwhile, chugs along like a phoned-in Strokes effort that ended up on the cutting room floor (maybe Gatesmith was the caretaker who swept it up?). But having previously admitted that these songs are generally about 'the experience at the Midwest dive bar, and youth culture around those places', there’s only so much one man – or one band – can articulate about such an insular subject through their craft.

But just before World of Joy threatens to peter out entirely, Howler’s first ever attempt at a ballad strides in to offer some welcome variation. ‘Here’s the Itch That Creeps Through My Skull’ is refreshingly shoegaze-y, with some almost – dare we say – Marr-esque riffs driving an entertaining number. “I don’t wanna be rich or famous no more”, sings Gatesmith, not-at-all-convincingly. And rounded off with the rousing sing-a-long qualities of ‘Aphorismic Wasteland Blues’ (Gatesmith’s rather unsubtle take on Dylan iconic piece of folk-rock), it’s a pleasing finale to a second record that had looked set to fall off the edge. Forgive my early facetiousness, lads: we’re only going to talk about the music from now on.