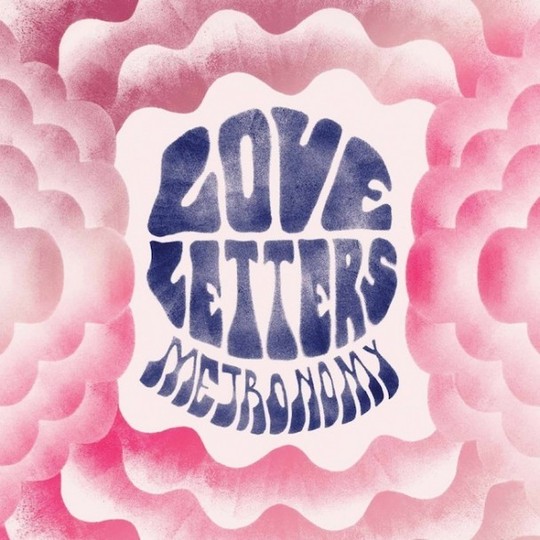 Metronomy could be held up a shining example of how bands can still evolve and grow in the internet age. Joe Mount’s project went from an instrumental electronic bedroom project to the silver-selling, Mercury-nominated, Brixton Academy-selling out The English Riviera. All of this leaves Love Letters perfectly poised to continue that upward trajectory and leave Mount dining at the top table of British music.

The premise of the album is simple and resonant. Love Letters isn’t the first album to describe the woes of being in love while away on tour. But for the most part, Mount manages to maintain originality with poignant lyrics that go beyond what we expect from electronic artists. “You said our love was written in the stars, but I never paid attention to my charts” goes ‘I’m Aquarius’, and on the title track, the honest simplicity of the chorus “I keep on writing love letters” works just as well. This is a painfully honest effort from Mount. There’s a rare stumble on the psychedelic ‘Month of Sundays’ but the vast majority of the record is a theme we’re very familiar with, being tackled with fresh songwriting nous.

Sonically, the album continues Mounts love of all things Sixties. The trademark lo-fi pop sound is present but there also manages to be a wide range of influences throughout. Midway instrumental track ‘Boy Racers’ sounds like the robot love child of Mount and Daft Punk. A brilliant bassline snakes its path all the way through the track and, despite its role as an instrumental, it’s one of the highlights of the album. Elsewhere, the aforementioned ‘I’m Aquarius’ gives a nod to Diana Ross and The Supremes. It’s the song on the album that best captures what The English Riviera did so well, in perfectly straddling the border between niche pop and hooks and accessibility.

The rest of the album is a bit more difficult. The hooks that peppered The English Riviera and - to less acclaim - Nights Out are simply not present. At these times, the album goes from original to a little derivative. The synths from ‘Monstrous’ sound familiar to the point that it borders on parody of the era of music that Mount loves. It’s a trend continued on ‘The Most Immaculate Haircut’ and by the time that track comes around, some of the quirkier nods to the Sixties have begun to grate. The only thing that’s left to save those particular tracks in Mount’s trademark falsetto. It’s a fine line between those tracks and the fantastic ‘Reservoir’, which you could easily accuse of the same flaws. The difference is that, in ‘Reservoir’, there’s enough added Metronomy to give the track legs. A trippy piece of synth works wonderfully well on the track, and vocally, Mount is at his best here. When the track climaxes with the line “heartbeats, dripping together”, you wonder why they’ve let certain parts of the album slip backwards so much.

Given recent cautious remarks from Mount about the band's success, it should come as no surprise that the album is occasionally difficult. It’s not inconceivable that an upward trajectory isn’t what Mount wants from Love Letters – he’s probably happier forging music away from that top table. When the album clicks on tracks like ‘The Upsetter’ and ‘I’m Aquarius’, it’s very nearly enough to drag it kicking and screaming to the limelight. Even when it tries to confound and challenge, it’s sometimes a success. However, there’s a nagging feeling that those derivative misses aren't so much accidental misfires as born out of a writer keen to remain free of the pressures of success. That prevents a promising record from being as good as it had the potential to be.