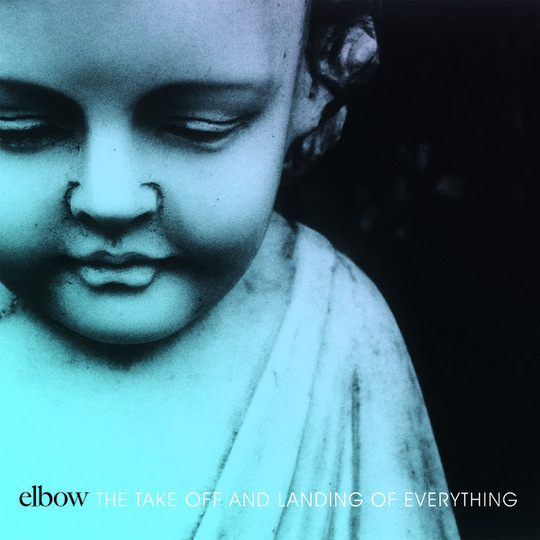 Ahead of the release of The Take Off and Landing of Everything, there’s been a lot of talk from Elbow about change. Change in circumstance for their talisman has come up a lot – the end of Guy Garvey’s long-term relationship, his time spent in New York, his imminent fortieth birthday – but thankfully this doesn’t completely overshadow his contribution to the album. NYC gets a couple of mentions, but the album doesn’t get stuck in travelogues and hotel room laments, while his other big upheavals provide themes of loss and friendship without looming too darkly over everything else.

Change has also had a much more subtle influence on Elbow as a whole in terms of their approach to making this album. Conventional methods that the band had grown comfortable with were ripped up for this, their sixth full-length, as they strove to freshen things up. Band members were dispatched away from the studio in small groups to work together in ways they hadn’t previously, like some sort of strange team-building exercise, in attempts to put a new spin on the familiar Elbow sounds.

It’s interesting that they’ve chosen to do so on the back of 2011’s Build A Rocket Boys!, a massively successful album that nevertheless saw the first accusations of complacency directed towards a band that had previously been pretty bullet-proof. Build A Rocket Boys! was far from bad, but it does seem that the band have seen a particular situation approaching on the horizon and have made a conscious decision to turn away from it.

There are still a couple of those textbook Elbow anthems here, although there’s enough heft to the likes of ‘New York Morning’ and the album’s title track to stop them seeming too lightweight. The former is carried by the wide-eyed wonder of Garvey’s lyrics, a real sense of purpose crossed with weary northern romanticism as he proclaims "Oh my god New York can talk, somewhere in all that talk is all the answers" over the top of the track’s striding, confident build up. The chorus, destined to be belted out a festival or two this summer, feels well-deserved when it comes crashing in, rather than belted on at the last minute to hide any gaping holes.

The title track meanwhile, toys with anthemic convention but ultimately disregards it in favour of a more fragmented, Chemical Brothers-style climax, a mantric single chord building up to a crescendo of Garvey’s vocals overlapping one another until they blur and fizzle out completely.

While these two moments stand out on initial listens, deeper exploration reveals more interesting things going on in the album’s nooks and crannies. Those new approaches to writing styles and practices don’t throw any wildly disparate musical styles into the mix or create anything massively surprising, but actually seem to encourage Elbow towards a more pared-back, concentrated sound throughout this record.

‘Fly Boy Blue/Lunette’, released as a preview earlier this year, is actually quite misleading at first, its shuffling rhythm, monotone vocals and blasts of soulful brass building and then breaking into what is probably this album’s default setting – Garvey’s wistful vocals over the top of sparse instrumentation, reflecting on age, friendship, and loss.

That mood, carried in both the music and Garvey’s lyrics, is best represented on ‘My Sad Captains’, a beautifully melancholic ode to lost friends and the changes that age can bring. Again a simple motif is used as the base around which jazzy brass and an insistent rhythm carry the rich, regretful vocals recognising ‘another sunrise with my sad captains/with who I choose to lose my mind….what a perfect waste of time’. It’s a gloriously sad song, and one that can sit proudly alongside anything else in Elbow’s back catalogue.

Some of Garvey’s finest moments in the past have come when he’s created a character that he can inhabit, and there’s a fine example of that here with ‘Charge’. Spoken from the point of view of an embittered older man observing a younger generation, it's another almost-anthem, laced with a hint of menace thanks to a woozy, distracting time-signature, Garvey’s strained vocals and the gruff refrain of ‘Glory be, these fuckers are ignoring me’. Of course, how much of this is actually the author’s own attitude and how much is imagined in the character is up for debate, but it’s good to hear that some anger still bubbles under the surface of someone often characterised as Manchester’s Nicest Man.

There’s plenty more of these little moments knitted throughout a record that’s designed to be listened to as a whole, complete with a sense of mood and place that runs throughout. If The Take Off And Landing Of Everything suggests one thing, it’s that Elbow are well aware of their surroundings, their situation, and their strengths and weaknesses. That they have dealt with personal strife and getting older while recalibrating their sound and their approach to songwriting is an impressive feat indeed.