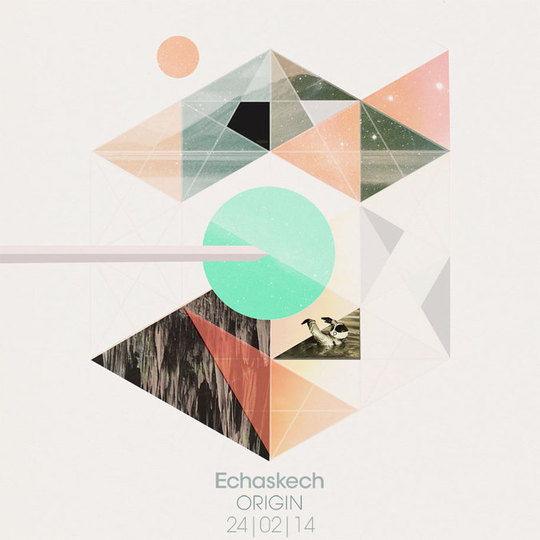 Leaving aside their name, which is one of the most abysmal I’ve come across in many a year, there’s a lot to like about Echaskech after a couple of listens to Origin. Their accessible IDM-influenced sound harks back so lovingly to the electronic greats of the Nineties that through most of the ten tracks here you’ll be hard pressed to avoid at least a grin. Origin is fun, a journey back to a time when electronic music had reached the perfect fusion of dance floor dynamics and ambiance.

Echaskech have presented some glorious tracks here. ‘Voyager’ is full of crumpled beats reminiscent of those that made Clark’s juddering Body Riddle such a triumph. ‘Telomer’ is an ecstatic skyscraper, and ‘Metic’ soars with an ease and grace most contemporary electronic acts have proved themselves completely incapable of. Sure, there’s a slight drop off in quality towards the end but, the run from ‘Voyager’ to ‘Ash Fallen’ at least sounds like the best EP the Sandison brothers never got round to releasing.

The problem comes when you try to examine Origin in more detail. Groundbreaking artists like Autechre and Boards of Canada were so good precisely because their work stood up to intense scrutiny, and many in the wave of acts they have influenced are equally durable in that respect. Say what you like about Jon Hopkins or The Field, you cannot deny that there’s always more going on than initially meets the ears in their compositions. It’s less obvious whether you can say the same about Echaskech.

Part of the problem is, predictably, the fact that Echaskech’s devotion to many of the aforementioned artists is so obvious. One can't listen to Origin without comparing it to some of the greatest electronic records of at time. That’s obviously an extremely unfair mindset to hold when listening to a new record, and especially when reviewing one, but we are products of our listening experiences and, as someone who probably still listens to one of Tri Repetae or Music Has the Right to Children on a near fortnightly basis, it’s pretty much an impossible one to get out of.

So, whilst I don’t want to be harsh on Echaskech, it has to be said that Origin does lack a certain intangible something. It’s pleasant, extremely so at points, but it’s little more than that. Everything on Origin feels ever so slightly stymied by the dedication of its creators to musical forms that can arguably never be better synthesised than they already have been by the artists that initially created them.

A worthwhile effort, then, but more individuality might go a long way to making Echaskech stand out from the crowd on future releases.