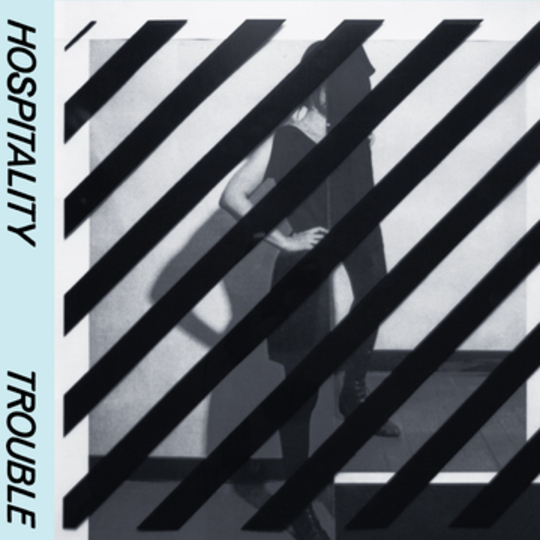 Hospitality’s self-titled debut album was a love letter to life in your early twenties – a carefree, cartwheeling attempt to see the good in bad decisions, and only the sweet in bittersweet romance. A few years on, their second LP Trouble doesn’t just feel like an expansion of these themes, but a direct sequel: resigned to the realities of late twenties disappointments, and finding lyrical escapism in empty, imaginary landscapes.

Gone are the colourful bursts of brass flooding the choruses. Gone also are the peppy drum beats elevating acoustica into carnival. Instead, songs like ‘Going Out’ swing their hips on a slow, sultry groove; call and response casually falling down the fretboard, with acres of room around the instruments. Even the most obviously hook-laden number on offer here (‘It’s Not Serious’) is delivered underarm. It’s a melody which could so easily be aimed squarely for the Soundcloud streams – but instead Hospitality show restraint in stripping it back to a wispy, dreamy shuffle; all the stronger for its understatement, and the space shot through the mix like beams of cold light.

In spite of being far more understated than its debut, Trouble is also more indulgent. The debut's songs were succinct, sharp and tightly woven; not an ounce of fat to trim from them. On Trouble, however, Hospitality don’t have any problem with letting things run on as long as they like. Songs like ‘I Miss Your Bones’ and ‘Nightingale’ reach what feels like a structural conclusion, before drifting off into an empty landscape of extra minutes, gently explored by wandering guitar lines. Beyond the looser grooves and thinner textures, Hospitality often create space simply by moving into it.

Just as important as how they create the space is how they fill it back up. The opening ten seconds of ‘Sullivan’ are taken up by heavy silence, a single piano chord, and a single bass note. Even with the entrance of Amber Papini’s slow, cyclical snatch of melody, the thing stays about as skeletal as a song is possible to be. But as the minutes stretch on, gentle drum patterns, pale piano runs, and an increasingly prominent guitar slowly ease their way into the texture. By its end – and without attracting the attention of the listener – the song reaches a climax of soft crescendo, some remove from its starting point.

This combination of understatement and subtly is at the heart of Hospitality’s success on Trouble: making an album far more spacious than their debut, but loaded with twice as many musical ideas. Each of these 10 songs is packed with one-off flourishes, casually offered before becoming enchanted by their next fancy. For every moment of immediacy like the riff of ‘Rockets And Jets’, plenty more gorgeous licks of melody worm their way to the surface on a tenth listen. So many treasures are hidden in plain sight by the album’s deceptive sense of emptiness – and these moments make the album absolutely shimmer.

It’s surprising how much busier the songs of Hospitality sound after hearing the deeper sparseness of Trouble. The track here which could pass as an offcut of their debut is ‘I Miss Your Bones’ – a number as snappy, spiky and spunky as anything on their first collection. Elsewhere, we’re hearing the band in an entirely new mode. The music of Hospitality was wide eyed with wonder at big, exciting life choices. These songs are the flinty reality of being a few years deep into the outcome of those decisions. Trouble is – in more ways than one – a far more mature album than their debut, and it’s also a far better one.

Pain is on Our Side Now