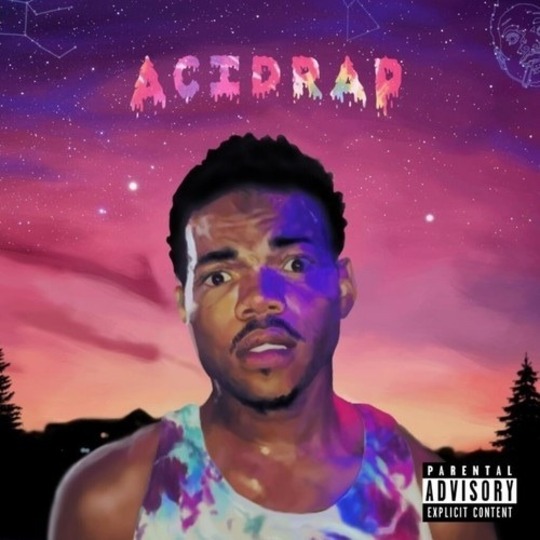 As Kanye's omnipresent ego finally eclipsed his music and Jay-Z revealed that rap's self-appointed emperor was - far from rocking Tom Ford - actually stark-bollock naked, 2013 could have easily gone down as the year hip-hop swallowed its own tail.

Yet, as the big names tipped over into banal self-aggrandisement, a new era of mixtape superstars emerged to reintroduce the idea that idiosyncratic personalities - unencumbered by labels of genre, record or clothing - could be a powerful force in hip-hop. They released much of their music for free, with a focus on the quality of their content and the size of their audience, rather than hollow verbosity and inflated pre-sales.

At the forefront of this movement has been the bloodshot eyes and unassuming figure of 20-year old Chicago native Chance the Rapper, who dropped his last mixtape Acid Rap at the end of April to an expectant audience, keen to see if he could fulfil the promise hinted at, in his rushed 2011 debut #10Day.

Self-aware to a fault, he addresses this head-on, opening the mixtape with the refrain, “Even better than I was the last time, baby" sung by a choir and wrapped in an infectious gospel hook. A claim which, if the last seven months have proved anything, is no idle boast. The intervening period seeing Chance's career explode, as the tape surpassed 250,000 downloads, positioned itself on the Billboard charts solely through illegally sold bootlegs and placed him on the BBC's much vaunted Sound of 2014 long list. Arguably greater than all of these achievements is how Acid Rap - which bursts forth in with an endearing mix of sincere lyricism and vibrant production - still remains unflinchingly deserving of all the praise that's been heaped upon it.

Musically it draws from a wide palette of styles and sounds; jazz, psychedelia, gospel, vintage soul samples and drums that echo Chicago Juke. Ranging from the aptly titled opener, 'Good Ass Intro', which feels like a bombastic overture for the entire album, to 'Juice' with its raucous bar-room piano swagger and 'NaNa' with its radiating organs and undulating bass. It's a lush aural assault that constantly leaves you guessing where it will go next. Sounds are slickly reappropriated and reordered to craft an experience that feels part live, part intentionally overproduced and never less than vivid.

Chance's other great strength comes from his freewheeling, hyper-kinetic flow, which combines rapping, singing and a sort of ferocious, percussive yelp. It's something which shuns easy definition and demands to be heard for better understanding. He makes full use of a panoramic vocal range, switching between a hoarse rasp on the weed-soaked meanderings of 'Smoke Again', to a bittersweet, breathless clarity of 'Cocoa Butter Kisses', by way of a conversational schizophrenia on 'Everybody's Somebody'. As though many voices are speaking for one, equally different and individual, but none so overpowering that they break the album’s feeling of cohesiveness.

Of course, his approach also serves a greater purpose; to deliver acutely intelligent lyricism that reveals a sombre duality at the heart of his carefree narcotic haze. While themes of recreational drug use, family and life on the streets of Chicago may not proffer any rap game revelations, it's the sincere approach in which he handles these themes and his attention to detail that strikes a chord. Never taking the predictable route, he balances out the album's wilder moments of excess with a powerful emotional centre, which doesn’t just want you to think: it asks you to feel.

It's this mature and empathetic attitude which encapsulates Chance’s worldview, whether considering the nature of love on ‘Interlude (That’s Love)’ or simply not wanting to die on Chicago’s streets on 'Pusha Man’. The latter half of which includes the heartbreaking refrain "I know you scared, you should ask us if we scared too... Me too”. He refuses to shy away from difficult questions which often remain unanswered, as on penultimate track 'Acid Rain’ where he raps; "Sometimes the truth don't rhyme/Sometime the lies get millions of views/Funerals for little girls, is that appealing to you?”. Scratching away at the drug soaked surface of his life to reveal melancholic realities, he doesn't compromise his style in the process, instead allowing it to better inform his storytelling.

Acid Rap succeeds for all the right reasons a mixtape should, finely balancing an idiosyncratic style, taught rhymes, emotional sincerity and rich production. It may have its peaks and troughs - some of the collaborations are undeserving of their prominence (Twista and Childish Gambino's contributions are less welcome than they assume) and there will be those who find Chance's vocal squawk a little too discordant. But as a showcase for the future of hip hop and for Chance's passion and energy - this is a near-flawless performance from an unstoppable talent.