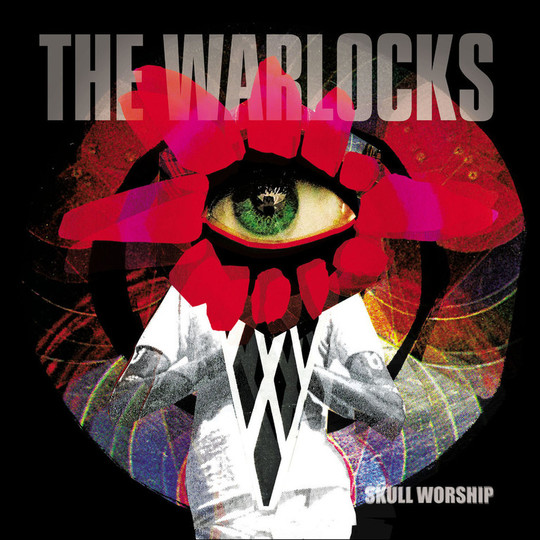 As former associates of The Brian Jonestown Massacre, LA quintet The Warlocks can almost lay claim to a similar number of line-up changes throughout their fifteen-year existence. While bandleader Bobby Hecksher and long term songwriting partner JC Rees remain, there's a changed look about The Warlocks version 2k13 from the one that last appeared with 2009's The Mirror Explodes. Despite the shifts in personnel, the band's sound hasn't really differentiated that much from where it set out on 2001's Rise And Fall. And even though that's probably one of the reasons they've retained "cult" status for so long, it's something that's served them well throughout the past decade-and-a-half. Not least with the current surge of interest in all things related to psychedelic rock.

That the gestation period for Skull Worship - their eighth album - took two years on top of the two in hiatus since its predecessors release perhaps speaks more about Hecksher's alleged reputation as something of a perfectionist than anything else. Slated as the final part of a musical trilogy that started with Heavy Deavy Skull Lover in 2007, Skull Worship drifts between a rock and a hard place almost akin to a game of two halves. Influenced by the likes of T Rex and Neu! as well as the usual psych behemoths such as Spacemen 3 and Hawkwind, it traverses between the dense, sonic palette of Phoenix, arguably the band's finest hour, and a more tranquil, introspective line similar to the one punctuating Rise And Fall's ebullient core.

Opener 'Dead Generation' carries The Warlocks most prophetic statement of intent to date. A bleak yet infectious call to arms that even makes a play for radio, admittedly of the 6Music rather than 1Xtra variety. Constructed around a nagging guitar riff, it is not a million miles away from 'Come Save Us' off 2005's Surgery and acts as a domineering launchpad to announce the band's return as 2013 draws to a close. 'Chameleon' too sounds like The Warlocks of old, fusing droning guitars with insistent pounding rhythms like a sonic rollercoaster.

There's a brief respite on the reflective 'Endless Drops', Hecksher's vocals once more buried in the mix for extra instrumentation. By the time George Serrano's drums convey the song to another level of sonic velocity, its densely orchestrated bassline matching the guitars notch for notch in the volume stakes. 'Silver & Plastic' also follows a laidback path, relying on a brooding intensity rather than ear shredding assault to get its creators' message across. Clocking in at just under three-and-a-half minutes, 'He Looks Good In Space' is possibly The Warlocks at their most experimentally dreamy. Drawing on backwards masked guitar parts, haunting overdubs and umpteen layers, it concentrates on assorted levels of sound inference rather than traditional song structure and is all the more refreshing for it.

While 'You've Changed' once again veers between introspective melancholy and disconcerted anger, penultimate number 'It's A Hard Fall' goes for the jugular, packing its wall of sound with chugging riffs and distorted feedback to ultimately satisfying success. By the time 'Eyes Jam' brings Skull Worship to its close in a similar, improvised fashion to 'Oh Shadie' off Phoenix or 'Suicide Note' from Surgery, there's a feeling of quiet contentment within Camp Warlocks. Although not quite being the pièce de résistance Bobby Hecksher and co. were hoping for, Skull Worship is a welcome return and when all's said and done, the musical landscape would be a much duller place without them.