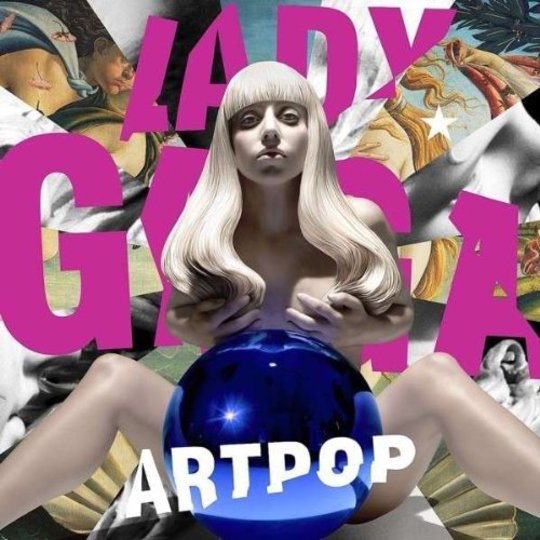 “I consider Lady Gaga the Picasso of the entertainment world.”
Tony Bennett

So... Lady Gaga wants to be AN ARTIST. Problem is, she isn’t too concerned about being a good artist. ARTPOP’s cover has been designed by bad artist extraordinaire Jeff Koons, a man for whom no subject matter is too kitsch, no theme too derivative, no statue of Michael Jackson and his chimpanzee too retina-shatteringly golden.

Rambunctious arty man Will Gompertz has made a commendable attempt to eulogise Koons’ garish ARTPOP artwork. He says it includes art-historical references to Botticelli’s ‘Venus’ as well as (less convincingly) Andy Warhol’s ‘Marilyn Diptych’ and Tracey Emin’s ‘I’ve Got It All’. But shouldn’t a true “masterpiece” (as the arty man calls it) do more than simply allude to older, superior works? The Van Gogh-aping cover of Joni Mitchell’s Turbulent Indigo is no masterpiece. The Géricault-defacing cover of Rum Sodomy & The Lash is no masterpiece, even if it is fleetingly amusing. Lord knows, the horrible recreation of Manet’s ‘Le déjeuner sur l’herbe’ for Bow Wow Wow’s The Last of the Mohicans is certainly no masterpiece. Koons’ art, this cover included, contends Gompertz, “asks questions about values, taste, capitalism, reality and beauty.” Does it? What questions? The cover is far less concerned with asking questions than making bold, conventional statements. This album is by Lady Gaga. This album is entitled ARTPOP. Lady Gaga wants to be viewed as a (bad) artist or as a work of (bad) art. Lady Gaga remains insatiably thirsty for our attention.

Virtually the only defence one can make for Koons’ bad art oeuvre is that it contains some measure of satirical intent, that it holds a mirror up to the superficiality of Western culture, even if it often seems more sniggeringly adolescent than caustically enlightening. Gaga doesn’t even snigger. She barely even smiles. She just sits there in her lobster costume, acting all haughty and mysterious.

Like Warhol before him and Hirst & co. after, at least Koons sells his bad artworks to the crass collectors who are wealthy and gullible enough to afford them. Gaga sells her bad art to those impressionable ‘Little Monsters’ who fork out their pocket money/scant wages on being fooled into thinking there’s actually something empowering about strutting your famished body around in some glittery knickers before a group of rabid spectators. (Don’t get me wrong, Gaga’s also made some benevolent, progressive statements and actions, particularly on the subject of gay rights. Although, if I was being cynical - moi? - I’d say that, for whatever socio-cultural reasons, given that homosexuals form a large proportion of Gaga’s audience, for her to neglect their cause would be a bit like Alan Titchmarsh remaining curiously silent on the plight of Britain’s gardeners.)

Like most of the mega-level popstars, Gaga has some killer tunes in her repertoire but no classic album. There is still no masterpiece. There are mini-masterpieces, sure (‘Poker Face’, ‘Bad Romance’, ‘Telephone’...) but come on Gargles, where’s your Thriller? Your Sign O The Times? Your Rumours? Hell, where’s your Sorry For Party Rocking? ARTPOP certainly isn’t it.

Gaga promised us an album on which she would lose the wig and the catsuit to serve up something more personal than before. ARTPOP isn’t that either. “Do you wanna see the girl who lives behind the aura?” she asks on the first track. Yes please. Does she show us that? Not really. Her subject matter is the same old sex stuff, fashion stuff, fame stuff while the music remains heavily EDM-centric, less Artpop than Europop.

‘Sexxx Dreams’ finds her orgasmic wails double-tracked with the kind of dead-eyed whispering of Madonna’s ‘Erotica’ but would be a lot sexier if the tidal wave synths weren’t interspersed with the impotence-inducing sound of the Seinfeld bass twang. With its throbbing club beats, skitterish electro effects, and Freddie Mercury operatics, ‘Mary Jane Holland’ has to be the least weed-friendly paean to marijuana ever recorded. Sabbath’s ‘Sweet Leaf’ it ain’t.

In the fast-flowing world of pop music, ARTPOP’s guest vocalists may seem a little old fashioned, but ‘Jewels ‘n’ Drugs’ with TI, Too $hort and Twista has a contagious low-riding gangsta swagger. If you can overlook the dubiousness of a young woman submissively pouting the lines “Do what you want, what you want with my body” at a man who was once accused of videotaping himself weeing on an underage girl, the duet with R Kelly succeeds on its own shallow 50-Shades-of-Soul terms. It’s here in the middle of this long, stodgy record that the tastiest morsels lie. The title track has a slow and seductive ‘Can’t Get You Out Of My Head’ groove and the angry zoomorphic repulsion of ‘Swine’ is conveyed with near Riot Grrl levels of snarled disgust. And, yes, ‘Donatella’ does momentarily lampoon the immorality and vacuity at the heart of the fashion industry: “Walk down the runway but don’t puke, it’s okay / You just had a salad today”. Shame it’s immediately followed by the bland, seemingly sincere celebratory plod that is ‘Fashion!’

Plenty of “touch me”, “I touch myself”, “put your hands all over my body” lines are thrown generously around like condoms at a swingers’ party. More substantial sentiments are few and far between. “My artpop could mean anything,” Gaga theorises at one point. Well does it mean anything? Does it mean nothing? Or does it mean something fairly boring? “I want you more than dope,” she howls on the unhinged, stripped-back ballad ‘Dope’. If this is what she meant by something more personal, perhaps we don’t want her to reveal herself after all. It’s a chorus that even Marilyn Manson might consider a little juvenile.

Indeed, I can’t help thinking that Marilyn Manson hangs over the whole of Gaga’s career (probably upside-down, dressed as a bat). Taking Ziggy Stardust as their blueprint, Brian Warner and Stefani Germanotta both invented extravagant alter-egos to propel themselves to superstardom. Stylistic flamboyance helped distract from sonic conventionality, their musical ambitions never matching the adventurousness of their “freaky” costumes, videos and stage-shows.

Sooner or later, all empires are destined to collapse. Some over-expand themselves to unsustainable levels. Others are ravaged by war, revolution, or natural disaster. Some are suddenly overshadowed by a sledgehammer-fellating sex-trafficked Disney refugee.

Beaten to Number 1 by Katy Perry dressed as an Oompa-Loompa and edited out of the Muppets movie, the cracks in Reich Gaga have already appeared and ARTPOP is not strong enough to repair them. Whether you’re an excitable tweenybopper, a hedonistic club-thumpin’ 20-something, or someone who usually listens to post-ambient quasi-retro dronecore and is frankly out of his depth reviewing such a prominent mainstream record, ARTPOP is a decidedly patchy ‘Just Dance’-less disappointment.

So what happens now, Gaga? Will you end up repeating the earlier hits to depleting crowds, churning out ever duller, largely neglected records, sitting alone in your spooky mansion, filling it with expensive real-life skellingtons while pickling your liver with absinthe? Will you wind up collaborating with Mrs Nickelback? Why not get out while you can, when you still have something resembling a strange form of dignity? Your options are many. Here are two:

a) Shun the fickle craving to become (and remain) the biggest popstar on the planet. Rise above it to leave Cyrus, Perry, and Minaj fighting among themselves (probably in their bikinis, in a paddling pool full of mud, as the drooling patriarchy looks on, fiddling with themselves). Become an actual artist. Go properly, fully weird. Take a leaf out of the unorthodox ex-popstar book of Scott Walker or David Sylvian. Aspire to grace the cover of The Wire, not Vanity Fair. Aim not for ephemeral pop notoriety but artistic immortality. You might have to execute your entourage and those who misguidingly advise you to refrain from further indulging your penchant for inaccessible free jazz but it’ll be much more fulfilling, I assure you.

b) Become an actual, actual artist. You know, like what Captain Beefheart did.